As a Disney VoluntEAR, I’m often asked how many of my co-workers participate in VoluntEAR events. The answer: tens of thousands. That’s right! Because the Disney family is a global family, we have opportunities to make a difference in communities all over the world.

Here in the United States this past weekend, more than 16,000 participants gathered at the Disneyland Resort in Anaheim for the 22nd annual CHOC Walk. Among the walkers were 660 Disney VoluntEARS who contributed toward the total $1.8 million raised for CHOC Children’s (Children’s Hospital of Orange County). The walk is the hospital’s largest fundraising event and has raised nearly $21 million since it began. 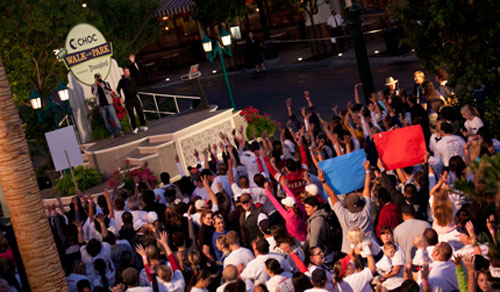 Recently in Argentina, VoluntEARS and Make-A-Wish Foundation – an organization Disney has partnered with for more than 30 years – helped brighten the day of a four-year-old girl suffering from leukemia. Disney stars from a popular Disney Junior television series walked into the little girl’s room while she was watching an episode of the show. The stars truly brought the show to life by playing games that appear in the series. It’s no surprise that Make-A-Wish Foundation receives more Disney-related wish requests than any others.

In Hong Kong this fall, two teams of VoluntEARS joined forces with Kids4Kids, an organization that helps older kids teach English to younger kids. They put together special English screenings of Toy Story 3 and Cars 2 for hundreds of local schoolchildren and spent time practicing English skills with the students. The events are part of the Disney Film Club, a three-year-old program supported by VoluntEARS.

Disney VoluntEARS events are happening all the time around the globe, and I look forward to sharing them here!