As a Disney VoluntEAR, it feels good to know that I’m part of a global team dedicated to making a difference in communities around the world.

This fall, hundreds of Disney VoluntEARS are helping to protect wildlife and marine ecosystems. It’s part of an annual effort that gives employees – along with their friends and families – an opportunity to participate in coastal cleanup events.

So far, cleanups have taken place in Hong Kong and Los Angeles.

In Hong Kong, VoluntEARS participated in an event to kick off Hong Kong’s International Coastal Cleanup 2012 which takes place September 15 to November 4. The event marked the first of four beach cleanups for more than 100 Disney VoluntEARS. 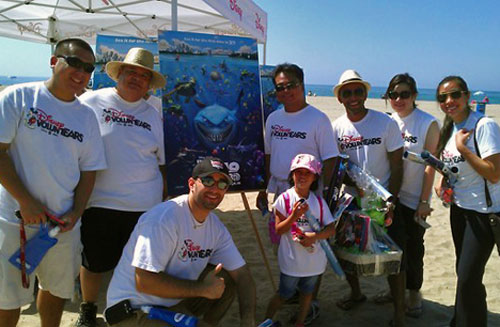 This month in Los Angeles, about 100 Disney VoluntEARS and community members worked with Heal The Bay to collect more than 36 pounds of trash at Will Rogers State Beach. The event was themed to Disney/Pixar’s Finding Nemo.

Finding Nemo is also the theme of a new Public Service Announcement created by The Walt Disney Studios, Disney Channel and Disney Friends for Change. In the video, Nemo and his friends help kids better understand the importance of keeping our oceans clean.