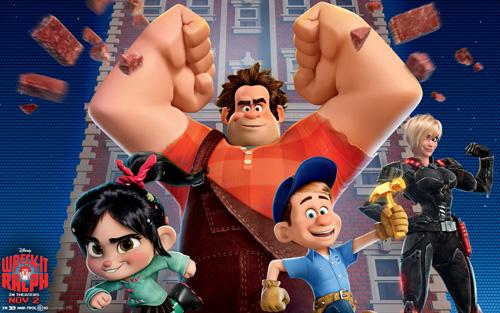 At Disney Animation, we want to push the artistic and technological envelope with each new film. Wreck-It Ralph presented our animators and technology team with a number of challenges when it came to creating the movie’s multi-dimensional – and very different – worlds. There’s the 8-bit-style gameplay of Fix-It Felix Jr. and the sophisticated first-person-shooter look of Hero’s Duty, as well as the cart racing game, Sugar Rush, set in a world made entirely of candy.

Wreck-It Ralph features nearly 190 distinct characters, including many fan favorites from classic real-world video games, which required 3D realizations that were true to the characters’ original art. The Walt Disney Animation Technology team, led by Chief Technology Officer Andy Hendrickson, worked with production artists to build a system that automatically creates the animation controls for the characters in a way that is flexible yet repeatable, because, “creating controls by hand for that volume of characters is just infeasible,” Andy notes.

Light, and how it interacts with the film’s many surfaces, was another element that had to be mastered — particularly in Sugar Rush, where cotton candy clouds, peanut butter roads and trees made of candy canes all had to look believable. None of the theoretical models commonly used in computer graphics gave a real explanation of what the human eye observes.

“We took data of hundreds of materials, shot with multiple angles between the camera and the light source, to build a new mathematical model that describes very well how the light interacts with those real materials,” Andy says. This meant they didn’t have to apply custom math and algorithms to each object to make them appear as different materials.

“Then we can use the big Disney Animation advantage, which is our awesome artists, to paint down the variables that go on to all objects in a scene, creating all kinds of surfaces that normally you couldn’t do in volume with computer graphics,” Andy adds.

Problem solved, right? “The thing it doesn’t do yet is the see-through look that candy has at the edge. So we had to develop a program we call ‘Gummi Shader’ to make the world of Sugar Rush essentially candy-lickable,” Andy says, laughing.

The special challenge of Hero’s Duty was giving it the authentic handheld feel of a first-person shooter game. The team created an in-house Camera Capture stage that uses optical tracking technology. “It can figure out where the camera is, feed it into the computer that contains our scene, render that scene into a picture and then feed it back to the camera’s viewfinder, so we can see what’s going on,” explains Andy.

It lets the team use classic camera techniques in the real world rather than having to painstakingly adjust curves by hand in the virtual world. The first-person, documentary style of Hero’s Duty would be incredibly difficult to achieve in the computer, but the camera capture gives instant feedback and a realistic look.

These exciting advancements in our animation technology provide us with a wider array of tools for all of our future projects. And you know we’re already on to the next one.