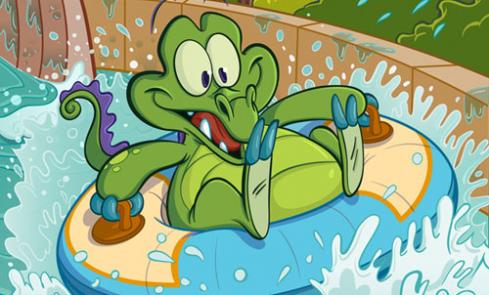 On September 22, 2011, Swampy the Alligator first swam into the hearts of families around the world in the smash hit mobile game Where’s My Water? for iOS and Android devices. Swampy represents a historic landmark for the Interactive group as the first Disney character to originate on a mobile platform.

Swampy-fever hasn’t stopped at Disney Mobile Games, inspiring new and upcoming products and experiences in division across the company. In June, Disney Consumer Products launched the Where’s My Water? line of toys and apparel including plush toys, t-shirts, iPhone cases and of course, bath toys.

And after a year, Where’s My Water? shows no signs of slowing down. This fall, fans can look forward to the new web series, “Disney Where’s My Water? Presents: Swampy’s Underground Adventures,” premiering on Disney.com and the Disney on YouTube network as well as special black-and-white levels in Where’s My Water? Free (iOS, Android) inspired by Disney and Tim Burton’s stop-motion animated film Frankenweenie featuring a Sparky cameo and all new theme music.

We’re excited to welcome Swampy to the Disney family and can’t wait to see what’s in store for our favorite gator in the years ahead!