We’ve got Frankenweenie on the brain. We’re heading into our third weekend at the special “Art of Frankenweenie Exhibition” at Disney’s California Adventure (on display through November 5 before continuing its international tour), where we are also showing an extended sneak peek of the film, and we just celebrated the Frankenweenie world premiere September 20 at Fantastic Fest in Austin, Texas. 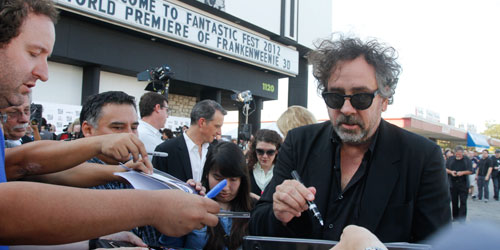 Coming to theaters October 5, Frankenweenie is a heartwarming tale about a boy, Victor, who harnesses the power of science to bring his dog, Sparky, back to life – with a few minor adjustments. From master filmmaker Tim Burton, Frankenweenie is an unusual juxtaposition of black-and-white and 3D – and did we mention it’s stop-motion? The result is a really unique visual experience for the big screen.

And now fans of Disney’s popular mobile game Where’s My Water? Free can plug into “10 Days of Frankenweenie.” 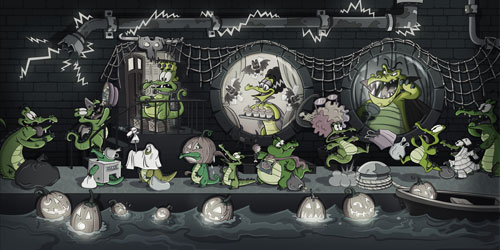 “10 Days of Frankenweenie” is the kind of exciting integration that leverages the power of Disney across our businesses.

It also presented some fun challenges. The Where’s My Water? Free team relished the chance to render the inventive gameplay in black and white for the first time. We also created a new soundtrack for the pack, all inspired by the film – including a take on theWhere’s My Water? Free theme song in the style of Frankenweenie composer Danny Elfman.

Sparky isn’t the first Disney character to make a guest appearance in the game. Earlier this summer, Disney released its first Where’s My Water? Free spinoff, Where’s My Perry?, starring Agent P, the alter ego of Perry the Platypus from Disney Channel’s Phineas and Ferb.

You can download “10 Days of Frankenweenie” for your iPhone, iPod touch, and iPad or for your Android devices.