At Walt Disney Parks and Resorts, we have a special and unique way of honoring those who have made important and lasting contributions to our business. For more than 58 years we have recognized these individuals by placing their names on windows on Main Street, U.S.A. 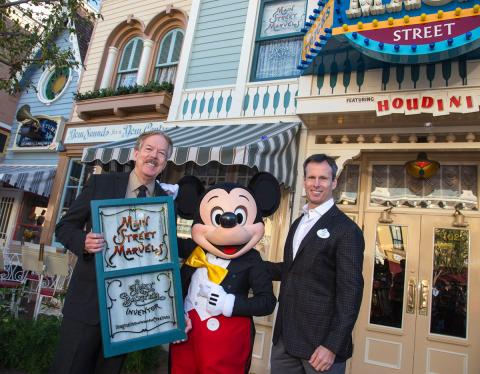 It’s a tradition started by Walt Disney himself, who wanted to acknowledge the people responsible for designing, building and enabling the creation of Disneyland Park. The latest to receive a window is longtime Walt Disney Imagineer and Disney Legend Tony Baxter, who was honored this past Friday in a special ceremony.

The distinct public recognition has taken place over the years at each of our magic kingdom style parks. Notable names that have been honored include Roy O. Disney, John Hench and Frank G. Wells. A series on the Disney Parks Blog, “Windows on Main Street, U.S.A.” by current Disneyland Park Vice President Jon Storbeck, highlights the recipients of this great honor in Walt’s original magic kingdom. In fact, his most recent post features Tony Baxter. Take a look at this in-depth piece on Tony and his accomplishments.