Nineteen-year-old Jace Andrews has seen the life-changing power of a wish firsthand, and he wants other kids facing critical illnesses to experience that as well. The Texas teen lights up as he recalls what it was like to become a Boston Red Sox player for a day and meet his idol, second baseman, Dustin Pedroia, courtesy of Make-A-Wish®. And while Jace’s memories of hitting a ball over Fenway Park’s legendary Green Monster continue to fill him with immeasurable joy, what he’s come to treasure most about his wish is the confidence he gained from it. He talks about the lasting impact of his grand-slam wish in the latest episode of Disney’s video series The Wish Effect, which reunited him virtually with ESPN reporter and essayist, Chris Connelly, who first met Jace in 2014 when his wish was featured in the network’s “My Wish” series that appeared on SportsCenter.

When Jace’s wish was granted, the then-12-year-old had already undergone three surgeries for a congenital heart condition—with the first operation taking place just days after he was born. He looks back on his childhood as “a roller coaster of a ride with ups and downs.” Jace’s heart condition prevented him from playing contact sports, and while he made an attempt to play golf and baseball with other kids his age, he simply didn’t have the stamina to keep up. A family vacation to Baltimore with his sports-loving family that included a match-up between the Baltimore Orioles and the Boston Red Sox provided unexpected inspiration and set Jace’s wish into motion.

“I sat on the first base line, and as soon as the Red Sox took the field in the bottom of the first inning to play defense, there was a little second baseman standing on the field named Dustin Pedroia,” Jace recounts. “And at the time I was not the biggest; I was a very small kid. I was not that tall, I was pretty skinny, and I kind of connected [with him] because Dustin was the smallest on the field. So I said, ‘Hey, if he can do it, I can do anything I want to as well.’” 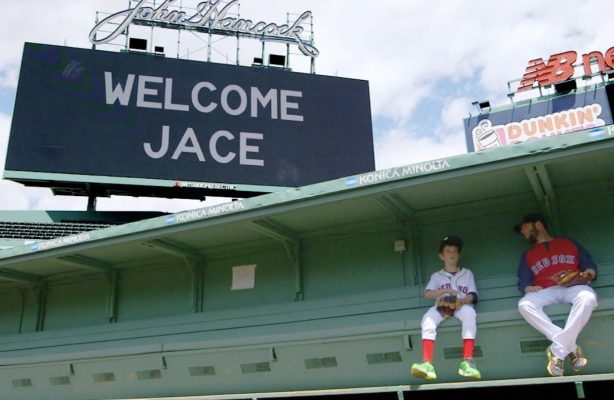 When it came time for Jace to choose his wish, he knew that he wanted to meet Pedroia, whose passion had become an inspiration to him. ESPN, which has been part of a 40-year relationship between Disney and Make-A-Wish that has seen more than 140,000 wishes come true, chronicled Jace’s unforgettable visit to Fenway Park. On his wish trip, Jace had his own locker for the day in the Red Sox clubhouse, consulted with the manager on the game’s batting order, took batting practice alongside his hero and, with Pedroia’s coaching, was able to hit his own ball over the Green Monster. “It probably took a good 15 to 20 minutes to get that one over, and it’s something that you never forget,” Jace says. “I remember the joy, the happiness—every emotion from that day is locked into that moment.” He points to that accomplishment, along with throwing out the game’s first pitch, as experiences that left him speechless. 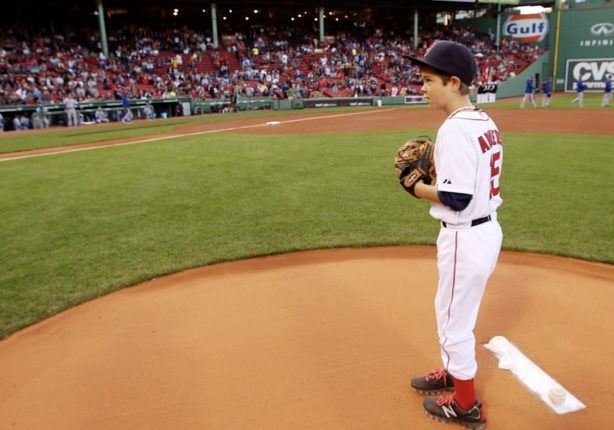 But as a direct result of his wish, the “speechless” 12-year-old soon found his words, along with a powerful boost of confidence that drives him to this day. “After that wish I became a new person,” Jace says with a laugh. “I knew from that day forward that whatever I wanted to do, that’s what I was going to work towards. And I knew from that moment that sports was where I wanted to be in some way, shape or form.” Jace is now a freshman at Oklahoma State University where he is studying sports media and hoping to become a sports broadcaster one day. “I get to be part of the game like nobody else does, and I get to bring the story to everybody else—which is what I feel like baseball is, it’s a story,” he says. Jace acknowledges how much he wishes he could play sports, but he emphasizes that he feels he’s getting more satisfaction from broadcasting than he ever would as an athlete.

Jace encourages other kids who are eagerly anticipating their own wishes to take some time and think about what they really want—and he emphasizes that his own wish brought him more than he could have ever hoped for. The wish effect is transformative, Jace says, stressing, “From that moment on, your life will be pointed at a whole new perspective… [It] just shows you how much joy this world has, even in times of doubt, even in times of pain, even in times of fear. The joy that [wish] can bring is just life-changing. You’ll never forget it, and from that moment on, your life will be forever changed.”

To learn more about the many ways Disney is working with Make-A-Wish to provide magic to wish kids and their families when they need it most, and to see more episodes of the video series visit wish.org/Disney.