“Dream big.” These are the words of encouragement that Make-A-Wish® kid, Julius, a 17-year-old from Summerton, South Carolina, has for children with critical illnesses, and the high school senior speaks from experience. Last year, Make-A-Wish and Disney granted Julius’ wish to visit the set of ABC’s Emmy®-nominated comedy black-ish was granted, and the teen—who plans to pursue a career in acting—describes the day as a “phenomenal” once-in-a-lifetime experience. In the latest episode of Disney’s video series “The Wish Effect,” Julius looks back on his life-changing wish and shares the incredible impact it has had on him.

“I’ve always grown up watching TV, wanting to be an actor when I grow up,” Julius says, noting that black-ish is his favorite program to watch and the kind of show he’d like to be part of someday. “I always imagine what goes on behind the scenes of a show, because when it comes to TV, everything’s perfect,” observes Julius, who also enjoys watching blooper reels that present an opportunity to discover some of the less-than-perfect moments that don’t end up on the air.

Julius wasn’t sure what to expect of his wish trip, but it involved much more than a tour of the set and a brief meeting with the cast. He was thrilled by the VIP treatment he was given from the moment he arrived at The Walt Disney Studios. He attended several production meetings and joined the creative team in the writers’ room, where he says, “they told me their ideas of how they come up with each new episode to keep it bright, fresh and new and really make it [reflect] what’s going on in the world today.” 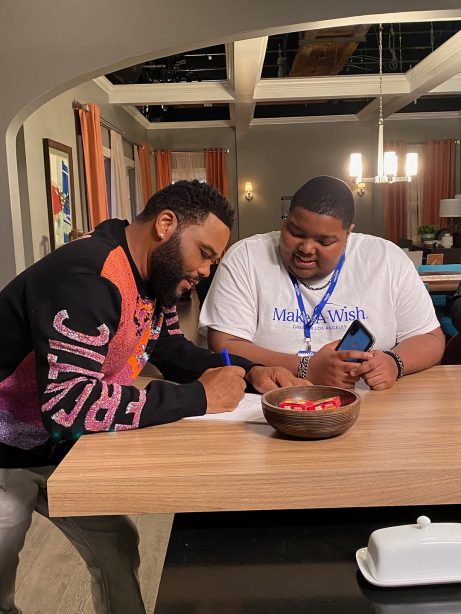 Julius watched the cast and crew film several scenes, sitting in his own director’s chair alongside the episode’s director. “As soon as I walked on the set, each and every actor and production member I met made me feel like I was there from the start,” Julius shares. The young man emphasizes how special that made him feel.

That special feeling only grew when Julius was invited by the show’s editors to record a voiceover as if he were Andre Johnson (Anthony Anderson). The sound engineer declared Julius to be a natural. Later, the young actor spent time with Anderson and fellow black-ish star Tracee Ellis Ross, who offered acting tips and advice to Julius and invited him to step into Anderson’s shoes and join Ross for a scene in which he played Andre.

Kaitlyn Spinali, the talent relations manager for ABC who escorted Julius on his wish, recently joined him for a virtual reunion that was captured for the new episode of “The Wish Effect.”  “They’re definitely a big family over there [on the black-ish set]. It really meant a lot to them that you wanted to come see what they do,” she told Julius. “To see that their work is making someone happy I think really inspires them.” And on a personal level, Spinali emphasized that wish-granting on behalf of ABC is her favorite part of her job. 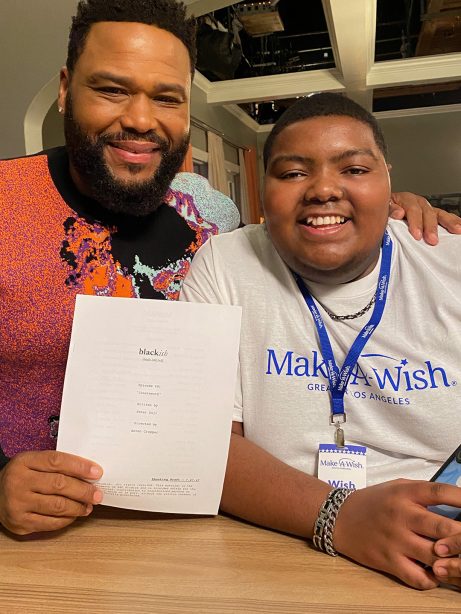 Julius’ mother, Sheryl, says that seeing her son’s wish come true meant the world to her. “[The cast] took so much time with him and gave him so much attention,” she said. “It really touched my heart and we were just so proud and so happy to be a part of it and to know that dreams come true, wishes do come true.”

Now, as Julius prepares to finish high school and attend college, where he plans to study acting, he wants other kids with critical illnesses to keep something in mind as they’re waiting for their own big dreams to come true. “When your wish comes, really enjoy it—because obviously you’ve been through a lot, so hopefully your wish takes your mind away from everything you’ve been going through,” he says. “Enjoy the time and just have fun. These are once-in-a-lifetime experiences.”

Julius’ experience was made possible through the incredible 40-year relationship between Disney and Make-A-Wish that has seen more than 140,000 wishes come true, including T.J.’s wish to tour Walt Disney Animation Studios and meet with animators, Tali’s wish for a Disney-themed RV camper and Henry’s selfless toy drive—all of which are spotlighted in previous installments of “The Wish Effect.” Every part of The Walt Disney Company participates in the making of this very special magic, from theme parks and Disney stores to movie and television studios.

To learn more about the many ways Disney is working with Make-A-Wish to provide magic to wish kids and their families when they need it most, and to see more episodes of the video series, visit wish.org/Disney.