Today, The Walt Disney Company announced a $1 million grant to Florida A&M University’s School of Journalism & Graphic Communication (SJGC) over the next five years with the establishment of the Disney Storytellers Fund at FAMU.

The grant is part of the Disney Future Storytellers program, an initiative aimed at increasing access to careers in storytelling and innovation for individuals from historically underrepresented or marginalized communities. The donation to SJGC will provide selected students with tuition and housing scholarships, a stipend, specialized programming, mentoring, leadership development, and more.

“Across Disney’s iconic brands, we are committed to increasing representation, inclusive storytelling, and opportunity,” said Jennifer Cohen, executive vice president, Corporate Social Responsibility, The Walt Disney Company. “The Disney Storytellers Fund at Florida A&M University’s School of Journalism and Communication will help empower the next generation of Black journalists, news and media executives, while also building on the rich legacy of creativity and innovation that the university has cultivated for decades.”

The announcement was made by ABC News President and FAMU alumna Kim Godwin on behalf of Disney during the university’s Homecoming Convocation. Established in 1982, FAMU’s highly regarded SJGC has been celebrating its 40th anniversary throughout the year.

“Florida A&M University changed my life. I first set foot on campus as a shy 16-year-old girl but graduated as a confident journalist prepared to tackle the biggest news stories,” said Godwin, who became the first Black executive to run a broadcast network news division when she joined ABC News in 2021. “FAMU gave me the tools I needed to get to where I am today, and I am truly grateful.”

She continued, “This gift brings me so much joy because I truly understand how much it’s going to change lives—and set the course for success for generations to come in some families. My joy is exponentially greater knowing that Disney is investing in the next generation of journalists—straightforward, innovative storytellers representing diverse communities from around the country. I was one of those kids who worked three jobs and still needed federal grants, scholarships, and church donations to make it from semester to semester. These Disney scholarships will ease financial worries and allow deserving students to put all their efforts into their education.” 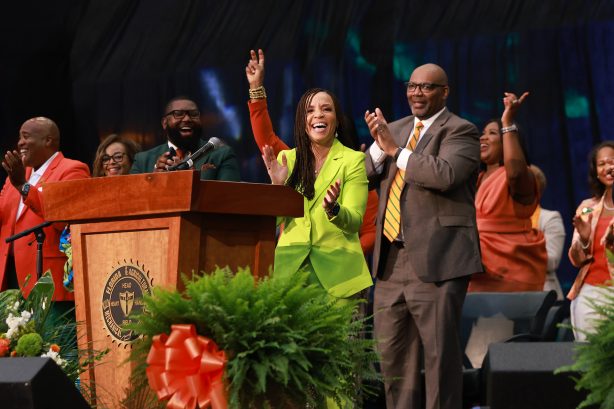 The $1 million investment is part of Disney’s mission to provide more equitable access to marginalized voices that have been historically underrepresented across the journalism, media, and television industries. This is the second such fund established by the Company at a historically Black university, and follows the creation of a multi-year Disney Storytellers Fund at Howard University earlier this year. In addition, in 2020 the Company launched Disney on the Yard, a multifaceted employee-led initiative dedicated to building a community of alumni from Historically Black Colleges and Universities working across The Walt Disney Company and providing meaningful opportunities for students. Most recently, the HBCU Week Foundation hosted its annual event at Walt Disney World Resort for the first time, drawing a record number of high school students and HBCU representatives, as part of its relationship with Disney on the Yard.

Dr. Larry Robinson, FAMU President, said that establishing such partnerships ensures that “our tradition of ‘Excellence with Caring’ extends well into the future. I am tremendously grateful for this generous gift from The Walt Disney Company and to have them as a key partner with us in changing lives, creating new opportunities, and producing tomorrow’s leaders.”

Through social investments and programs like Disney Future Storytellers, the Company is increasing access to careers in media, entertainment, technology, and hospitality and helping ensure the stories being told across the industry accurately reflect the rich diversity of the world we live in. From arts and STEM education for school-age children to scholarships, mentoring, and creative and technical skill-building for teens and young adults, Disney is helping today’s youth dream about their future, build their talents and skills, and become who they imagine they can be.