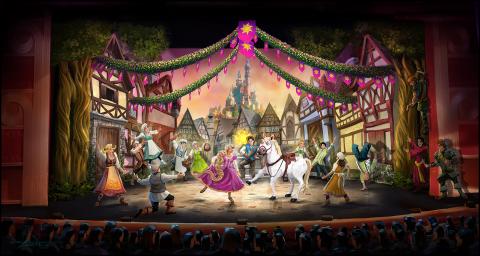 Today, Disney Cruise Line announced that in November 2015, the endearing characters and captivating music of the animated film Tangled will enchant audiences once again, this time as an original stage show spectacular at sea aboard the Disney Magic. This is the first time the beloved Disney tale has been adapted for the stage.

The show will stay true to the storyline from the hit feature film—with a few special twists to create a live staged production—featuring favorite characters like Rapunzel, Flynn Rider, the villainous Mother Gothel and Maximus the police horse. Elaborate costumes, groundbreaking puppetry and stunning set designs transform the 977-seat Walt Disney Theatre into a fanciful Bavarian kingdom, immersing audiences in Rapunzel’s world and making them feel a part of her story.