UPDATE (January 13, 2015): Star Wars: The Force Awakens recently became the biggest release of all-time in the UK. It opened in China on January 9 with an estimated $53M two-day debut, marking the biggest opening Saturday there as well as the biggest Saturday/Sunday debut. 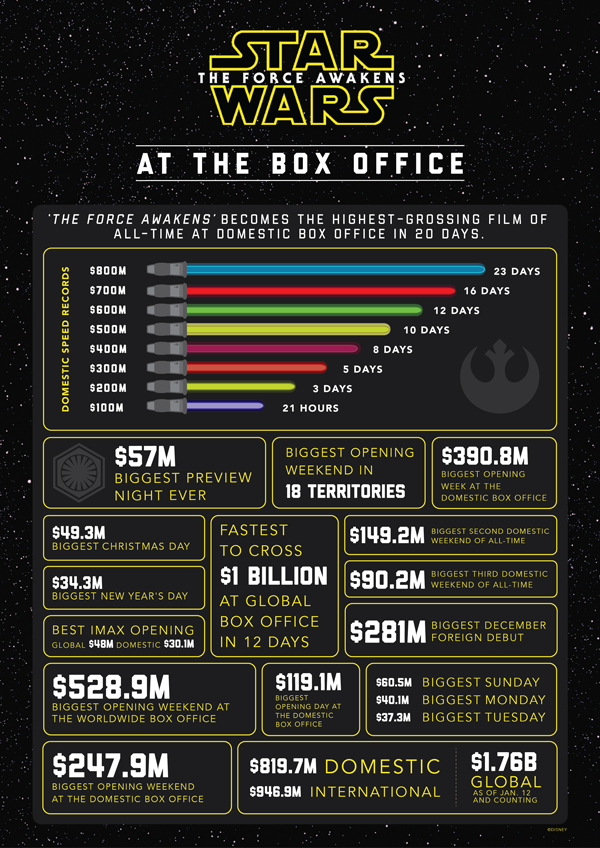 This afternoon, with early box office results in, Star Wars: The Force Awakens became the highest grossing film of all time in the domestic market, surpassing the $760.5M lifetime gross of Avatar in a record-shattering 20 days of release. In addition, the film crossed the $800M mark at the international box office today.

Star Wars: The Force Awakens debuted in the US and Canada on Dec. 18, its first two weeks pushing the domestic annual industry box office to an all-time high of $11B. It has set numerous individual records including:

Globally, the film posted the highest global opening weekend of all time ($528.967M) and surpassed $1B in a record 12 days. It also had the biggest global IMAX debut ($48M) and surpassed $152M in IMAX in a record 19 days. It was the highest international debut in December history with $281M, and it remains #1 in many territories after posting the biggest opening weekend in at least 18 major markets.

Named one of AFI’s top 10 films of 2015, Star Wars: The Force Awakens now heads into its fourth weekend of global release ahead of a debut in its final international market, China, on Jan. 9.