Today, as Star Wars: Rise of the Resistance opens at Disney’s Hollywood Studios in Florida, fans who first discovered Star Wars on the big screen now will be able to experience the galaxy far, far away in ways they’d previously only dared to imagine. The new attraction is one of the most immersive, ambitious and technologically advanced attractions ever created for a Disney park and sets a new standard for what a Disney theme park experience can be.

“Star Wars: Rise of the Resistance is unlike anything you’ve ever experienced before. In fact, we threw out the rule book when designing this attraction—just like George Lucas did when he created the story that brings us all here today,” said Disney Parks, Experiences and Products Chairman Bob Chapek during a dedication ceremony for the attraction last night inside Star Wars: Galaxy’s Edge. “This is immersive experiential storytelling on a massive, cinematic scale.”

More than five years in the making, Star Wars: Rise of the Resistance was made possible by a spectacular collaboration between Walt Disney Imagineering (WDI) and Lucasfilm. Doug Chiang, vice president and executive creative director of Lucasfilm, says the two design teams worked together seamlessly to take the immersive world of the films and make it possible for guests to live out their own Star Wars stories—complete with lightsabers, blasters, tractor beams and more. “In our films, those are visual effects that are added after the fact,” he notes. “Here they have to be a real-time experience.” 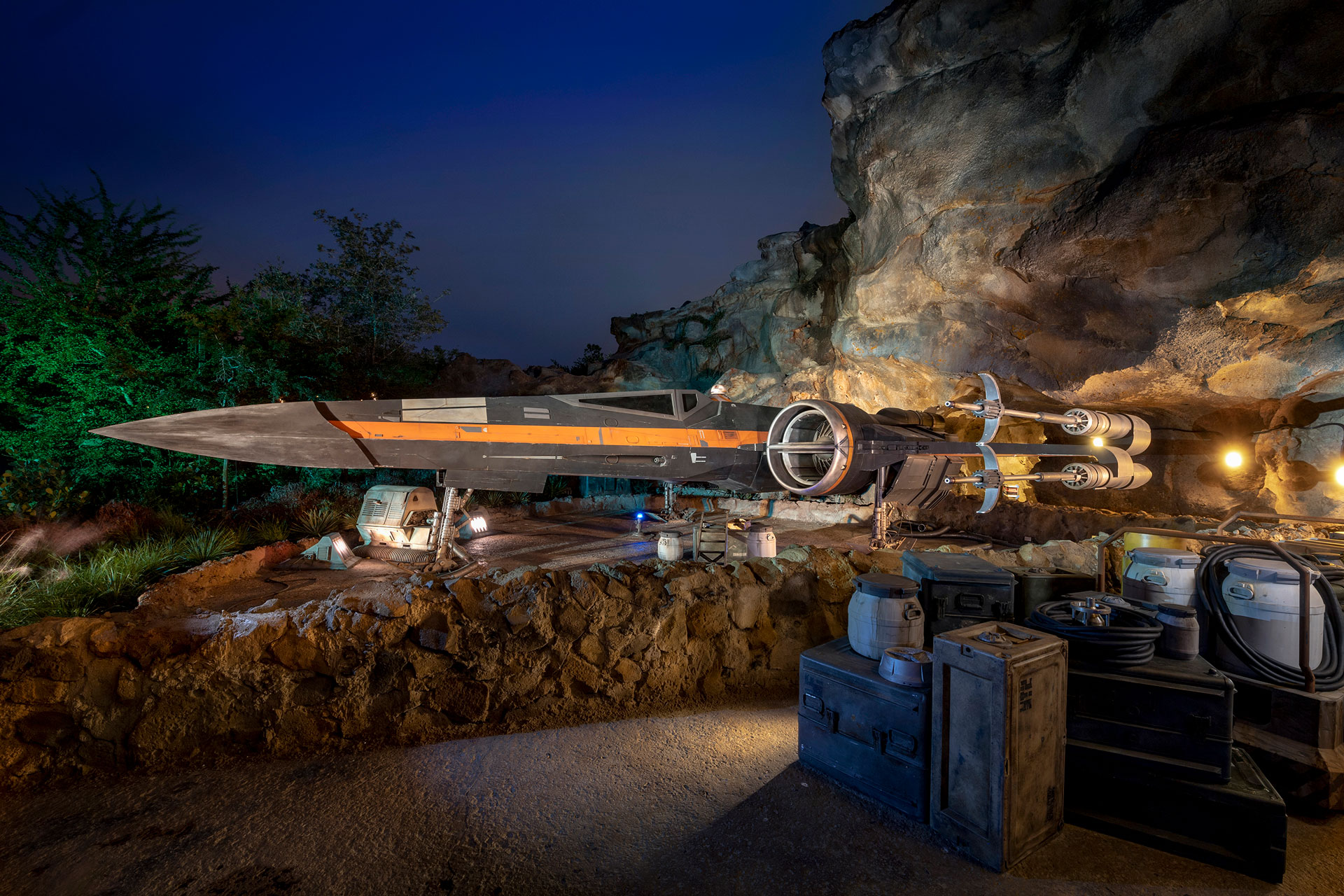 The attraction uses cutting-edge technology to power the storytelling that invites guests to become heroes of the Resistance in a climactic battle with the First Order in an adventure that’s set between the events of Star Wars: The Last Jedi and the upcoming Star Wars: The Rise of Skywalker, opening in theaters later this month. As part of the thrilling action, guests launch into space aboard a transport shuttle, only to be captured by a Star Destroyer and pursued by Supreme Leader Kylo Ren as they frantically search for a way to escape the clutches of the First Order. Actors from the current Star Wars film trilogy, including Daisy Ridley (Rey), Adam Driver (Kylo Ren), John Boyega (Finn), Oscar Isaac (Poe Dameron) and Domhnall Gleeson (General Hux), reprise their roles for new scenes and dialogue in the attraction. 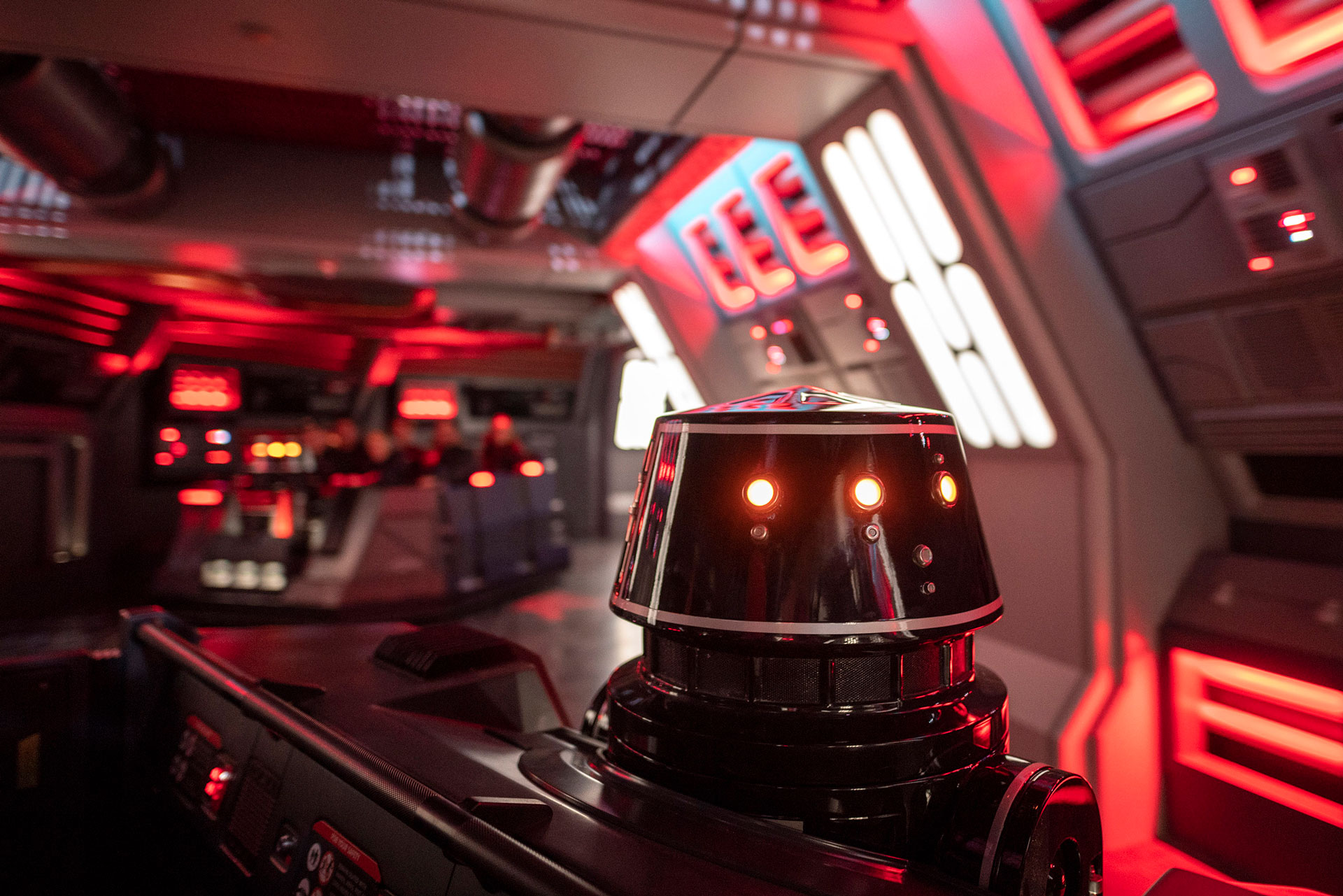 Walt Disney Imagineering combined multiple ride systems to tell the story of Star Wars: Rise of the Resistance. Guests will feel as though they are falling from space to crash land on the planet Batuu in a sequence made possible by a new simulator experience. Trackless ride vehicles in the attraction are some of the most advanced ever used in a Disney park, and they appear to be piloted by R5 droids, which only adds to the excitement for guests. “That’s a very key thing. You don’t know which way the droid is going to drive the vehicles. There are no tracks on the floor,” says John Larena, executive creative director of Star Wars: Rise of the Resistance, who points out that the trackless system creates a seemingly unlimited number of possibilities for how the action will unfold.

Disney A-1000 Audio-Animatronics® figures appearing in the attraction provide a deep level of immersive storytelling through their lifelike and dynamic movements. “You’re going to see a fidelity in the articulation of these figures that you’ve never seen before,” Larena says. 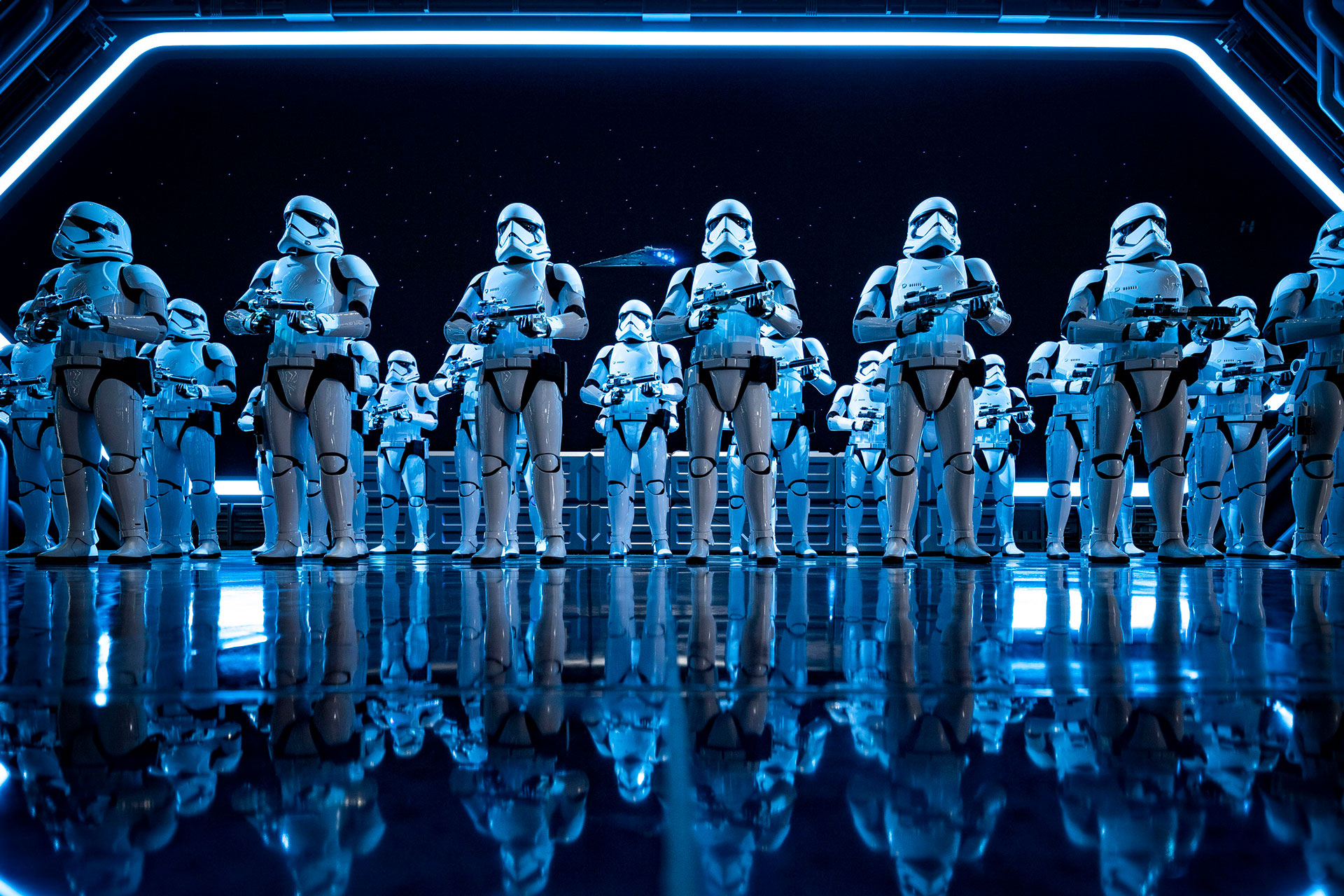 To sustain the reality of Star Wars: Rise of the Resistance, the WDI and Lucasfilm teams together found the perfect blend of Disney and movie magic. “You have the spectacle and scope of cinema, but you have the grounding of a real-life experience of a theme park,” notes Chiang.

The end result, says Larena, is an authentically Star Wars experience with inherent DNA that can be traced back to Walt Disney and the parks’ earliest attractions. “Much like Pirates of the Caribbean, there are going to be details all over the place,” he says. “You’re not going to get them all on the first or even the second ride. Keep your eyes peeled—every time you ride this, you’re going to notice another detail that you didn’t catch before.”