Whether you remember her as the spunky sidekick to Peter Pan or watched her embark on magical fairy adventures, Tinker Bell is a cherished character for Disney fans of all ages. Tinker Bell’s journey began in J.M Barrie’s original version of Peter Pan, and the feisty fairy is still relevant today as one of Disney’s most popular female characters. Her roots are now explored in Tinker Bell: An Evolution, published by Disney Editions and authored by Mindy Johnson, a Disney creative consultant and avid Tinker Bell fan. Mindy explores the fairy’s evolution with never-before-seen pictures from the Animation Research Library and shares her experience working with Disney Legends Alice Davis and Marc Davis. Disney Post recently sat down with Mindy to discuss the book and her passion for our favorite fairy. 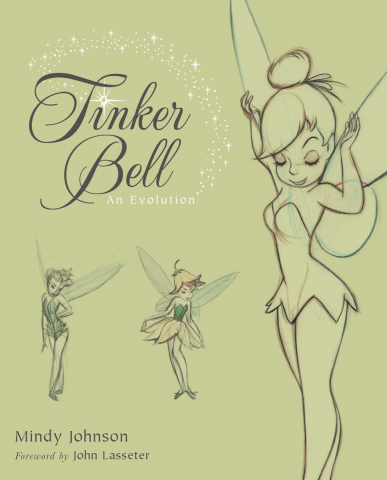 How did you become involved with Tinker Bell?
My introduction to Tinker Bell began when I was quite young, watching The Wonderful World of Disney every Sunday night, but it was nearly seven years ago while working with The Walt Disney Studios that I unearthed various early concept pieces of artwork for Tinker Bell! Tinker Bell as a redhead, a brunette and even a dainty powder puff… These various permutations sparked the rather extraordinary journey that unfolds in my book Tinker Bell: An Evolution.

Why did you want to pursue a book on Tinker Bell?
Tinker Bell is a character who appeals to many generations of fans. As I dug into the history of the Studio’s Peter Pan development artwork, it was fascinating to see the various ideas they explored for Tinker Bell before deciding on the final form of our favorite fairy. I was intrigued with how this came about, but there were also a number of unanswered questions. The pursuit of the answers to these questions, along with the extraordinary artwork, made quite a compelling story as you’ll discover within the pages of the book.

Tinker Bell: An Evolution is a highly visual compilation of how Tinker Bell evolved. How did you go about choosing the pictures, and can you tell us more about your experience with the Animation Research Library?
Choosing the final artwork for the book presented quite a challenge, and there are so many extraordinary images that didn’t make it to the final book. With countless pieces of art created for the production of Peter Pan and thousands of additional photographs, objects and documents, it was a daunting task. Several staff members with the Studio’s ARL were a tremendous help. As a result, readers of this treasure are seeing the rarest of visual gems—and a number of never-before-seen photographs and images, as well!

You got to work closely with Disney Legends Alice Davis and Marc Davis. How was that experience, and what did you learn from them?
Tinker Bell had the most extensive development in the Studio’s history (up to that point) and it was Marc Davis’ legendary talents and experience that brought us to the final fairy we know and love. Sadly, Marc passed away 13 years ago, so it was important to gather as much insight into Marc’s overall process with designing and animating Tinker Bell. In addition to combing through various transcripts and interviews, several of Marc’s co-animators, including Burny Mattinson and Joe Hale, offered insights and details into his work, as did two of today’s top animators—Andreas Deja and Eric Goldberg. Thankfully, Marc’s wife and Disney Legend Alice Davis was a tremendous source of insight into Marc’s creative working process. Alice was also a valued voice of encouragement throughout the lengthy journey of this book.