An ominous-looking mansion set adrift in the marshy distance? A ghastly figure hanging in the attic rafters? Ethereal organ music playing to an “empty” ballroom? A ghostly bride beckoning? These, foolish mortals, are some of the all-too-familiar experiences Disney fans have come to expect and embrace in the Haunted Mansion attraction.

Debuting first at Disneyland during the summer of 1969, this family-friendly fright-fest has entertained Disney Parks guests for nearly half a century, leaving lasting impressions of the shared and “supernatural” experiences found within its creaking walls.

The Walt Disney Archives recently shared with D23: The Official Disney Fan Club several story sketches from the development of the attraction, showcasing some instantly recognizable show elements. The sketches are an part of the collection that is going on a roadshow for D23 Disney Fanniversary Celebration presented by Walt Disney Records The Legacy Collection, visiting cities across the U.S. to commemorate dozens of magical Disney milestones celebrating landmark anniversaries this year. Here’s a peek at one of the sketches, featuring a ghostly bride that has been part of the myth and lore of the Haunted Mansion from very early on in the attraction’s development: 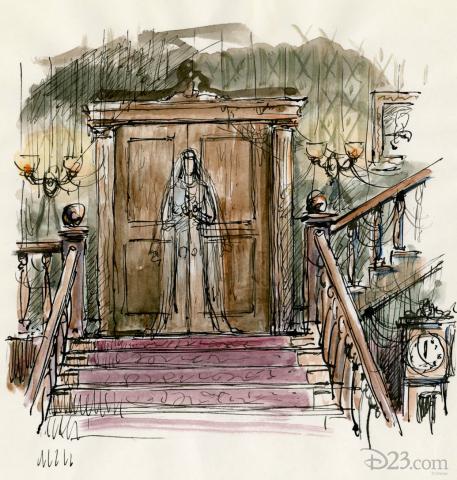 These works of art were likely created in the late 1950s or early 1960s, during early development work on the Mansion. “When an attraction is as popular as Haunted Mansionis, it’s quite a feat to find rarely seen materials to share for its anniversary,” Rebecca Cline, director, the Walt Disney Archives, notes. “The Archives staff members were very excited to rediscover these wonderful drawings in our files recently, and we deemed this a perfect occasion for sharing them. The colors and designs of the four sketches help establish a definitive sense of ‘mood’ and ‘space’ for the attraction—moments that theme park guests have come to love. The best part is that these vivid renderings are from early scripted ideas that ultimately (in one form or another) wound up in the final attraction.”

Head to D23.com to view all of the sketches from the collection.