The Studio Showcase for D23 Expo 2022 presented by Visa® was so epic, they had to split it up into two massive presentations… and this morning in Hall D23, Day 2—featuring the latest and greatest from Lucasfilm, Marvel Studios, and 20th Century Studios—fired up fans with more new announcements; more never-before-seen footage; and more stars from Disney’s biggest streaming and theatrical titles slated for the coming months and beyond. 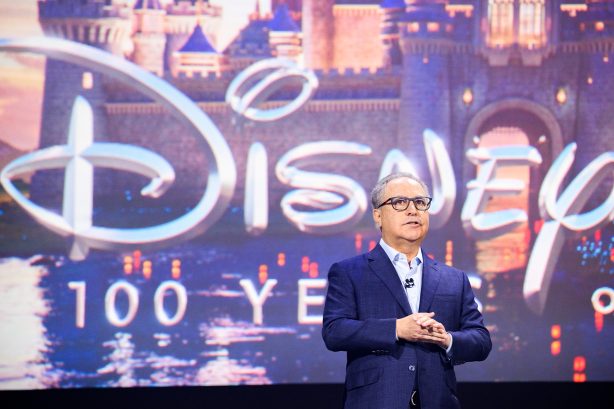 Kicking off the proceedings, Alan Bergman, chairman, The Walt Disney Studios, reflected on the 13-year history of D23 Expo—as well as the evolution of the Studios group. “That [first] year, none of the iconic studios you’ll hear from today were part of the company,” Bergman explained. “It was just Disney Animation, Disney Live Action, and Pixar. We announced the Marvel acquisition just before our first Expo in 2009. Then three years later, we added Lucasfilm, and in 2019, 20th Century Studios. I’ve been at Disney for 26 years, so it’s been incredibly exciting to welcome each of them to our Studio family. And like Disney and Pixar, each of these studios has a phenomenal legacy of storytelling.”

Bergman was then joined by Kathleen Kennedy, president, Lucasfilm; Kevin Feige, producer and president, Marvel Studios; and James Cameron, director of 20th Century Studios’ upcoming Avatar: The Way of Water, to showcase a veritable smorgasbord of incredible content to come.

Kennedy first welcomed Andor series star and executive producer Diego Luna, as well as costars Genevieve O’Reilly, Kyle Soller, and Adria Arjona, to tease the upcoming 24-episode spy thriller. The era featured in Andor—the five years before the events of Rogue One: A Star Wars Story—is filled with danger, deception, and intrigue, where Cassian Andor will embark on the path that is destined to turn him into a rebel hero. Much to the delight of the assembled crowd, Luna and his costars unveiled a final trailer for the series.

The series presents Star Wars from a different perspective, focusing on everyday people whose lives are affected by the Empire. The decisions they make have real consequences, and the stakes for them—and the galaxy—couldn’t be higher. The series debuts with three episodes on Disney+ on September 21.

Next, Kennedy welcomed Warwick Davis to the stage to talk about the new Disney+ series Willow—a live-action fantasy-adventure series that returns to the world of Andowyne that we first met in the 1988 feature film (directed by Ron Howard and produced by Disney Legend George Lucas). Davis was then joined by series stars Joanne Whalley (Sorsha), Ruby Cruz (Kit), Erin Kellyman (Jade), Ellie Bamber (Dove), Dempsey Bryk (Airk), Amar Chadha-Patel (Boorman), and Tony Revolori (Graydon)—and as a special surprise, Christian Slater was also welcomed to stage as a member of the ensemble cast! We were also privy to a new trailer for the series:

Set in a magical world where brownies, sorcerers, trolls, and other mystical creatures flourish, Willow is the story of an unlikely group of heroes who set off on a dangerous quest, facing their inner demons and coming together to save their world. An epic period fantasy told with a modern sensibility and plenty of humor and heart, Willow begins streaming on Disney+ November 30. 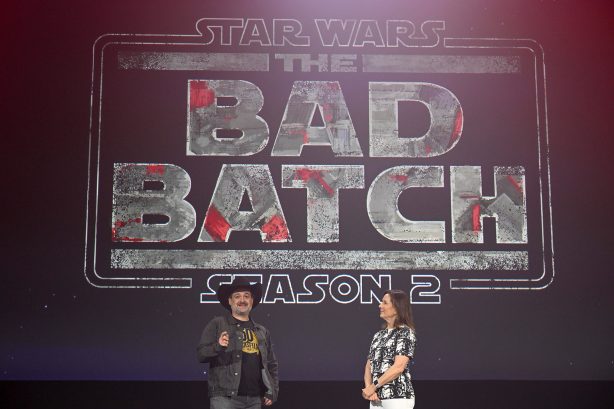 Star Wars: The Bad Batch
Next up, Kennedy welcomed Dave Filoni—who shared a host of amazing Star Wars-related announcements. First, Filoni showed a new image from the upcoming 16-episode second season of the animated series Star Wars: The Bad Batch. Months have passed since the events on Kamino, and the Bad Batch continue their journey navigating the Empire after the fall of the Republic. They’ll cross paths with friends and foes, both new and familiar, as they take on a variety of thrilling mercenary missions that will take them to unexpected and dangerous new places. And revealed today: The series will begin streaming on Disney+ with a two-episode premiere on January 4, 2023.

Star Wars: Tales of the Jedi

Filoni next revealed news about Star Wars: Tales of the Jedi, six brand-new animated shorts featuring parables built around Jedi from the prequel era. Journey into the lives of two distinctly different Jedi—Ahsoka Tano and Count Dooku—who will each be put to the test as they make choices that will define their destinies. Filoni delighted the audience by sharing an official trailer for the shorts.

All six shorts will debut October 26 on Disney+. 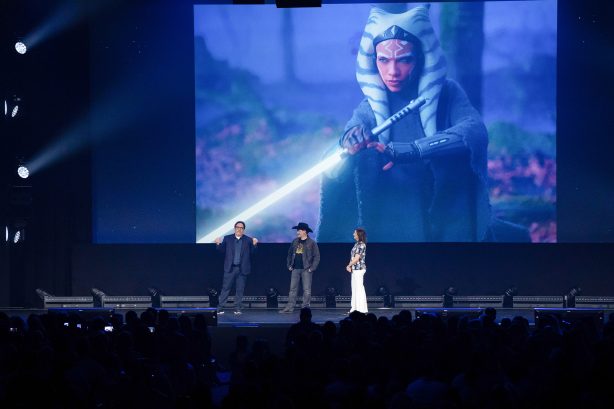 And speaking of a certain popular Jedi, Filoni shared with Hall D23 how much the character of Ahsoka means to him—having crafted her story since her 2008 debut in the animated series Star Wars: The Clone Wars through her live-action debut in The Mandalorian. Ahsoka is a new live-action series heading to Disney+, starring Rosario Dawson in the title role. Disney Legend Jon Favreau joined Filoni on stage to talk about the series, and shared first-look images with the assembled fans. Set after the fall of the Empire, Ahsoka follows the former Jedi knight Ahsoka Tano as she investigates an emerging threat to a vulnerable galaxy. The new series is slated for 2023 and will be exclusive to Disney+. 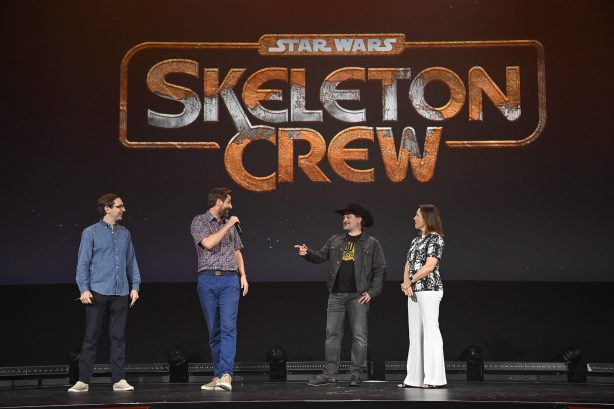 Favreau and Filoni were then joined by Star Wars: Skeleton Crew creators Jon Watts and Christopher Ford, who talked about the series, which is coming soon on Disney+. Skeleton Crew tells the story of four kids who find themselves lost in in the vastness of the galaxy trying to find their way home… and as a special surprise, series star Jude Law joined Favreau and Filoni to greet the fans!

Favreau and Filoni couldn’t leave the stage without chatting about The Mandalorian—and the crowd erupted with delight when they welcomed cast members Pedro Pascal, Katee Sackhoff, Amy Sedaris, Giancarlo Esposito, and Emily Swallow to join them. Together, they shared the newest trailer for Season 3 of the series.

In the third season of The Mandalorian, the Mandalorian and Grogu have been reunited and continue their journey through the lawless galaxy. Season 3 is set to launch exclusively on Disney+ in 2023. 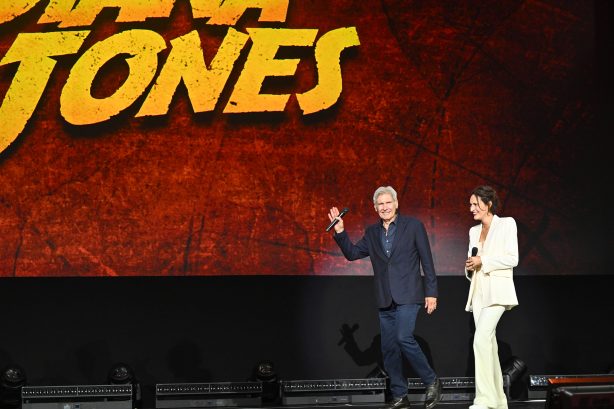 Finally, Kennedy concluded the Lucasfilm portion of the proceedings by sharing info about one more title: Indiana Jones 5! She welcomed the film’s director, James Mangold, who shared some incredible details and first-look footage from the upcoming fifth installment of the immensely popular Indiana Jones franchise—which opens in theaters June 30, 2023. And then, much to the utter delight of Hall D23, Kennedy and Mangold were joined on stage by the film’s stars, Harrison Ford and Phoebe Waller-Bridge! “Thank you for making these films such an incredible experience for all of us,” said an emotional Ford. “I’m very proud to say that this one is fantastic, and [Waller-Bridge] is one of the reasons.”

Ford continued, “Indiana Jones movies are about fantasy and mystery, but they’re also about heart… I’m really, really happy that we have a really human story to tell, as well as a movie that will kick your [butt].”

Feige, reflecting on his multiple sojourns to D23 Expos over the years, spoke of watching the performances created just the event from around the worlds of Disney: “I’ve always been a little jealous,” Feige admitted. “Why can’t we get our own musical number?” That kicked off an incredible, high-energy performance of the fan-favorite “I Could Do This All Day” from the show-within-a-show Rogers: The Musical, featured in last year’s Disney+ Original series Hawkeye! The number, boasting 22 performers, was accompanied by a six-piece rhythm section led by composer and conductor Marc Shaiman, who wrote the song for the episode. 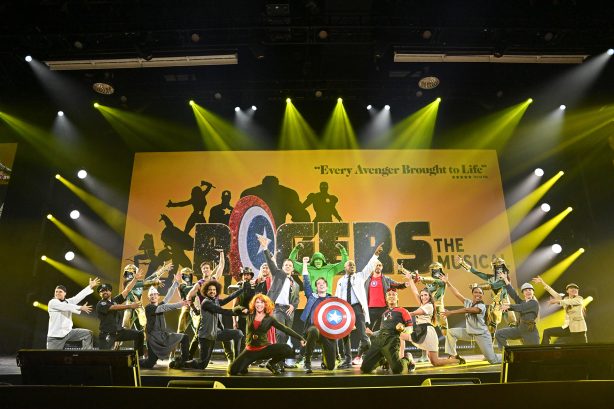 Feige returned to the stage to detail several recent announcements, including the Multiverse Saga—the conclusion of Phase 4, the Phase 5 slate, and the Phase 6 titles that include Fantastic Four and two new Avengers films: The Kang Dynasty and Secret Wars. 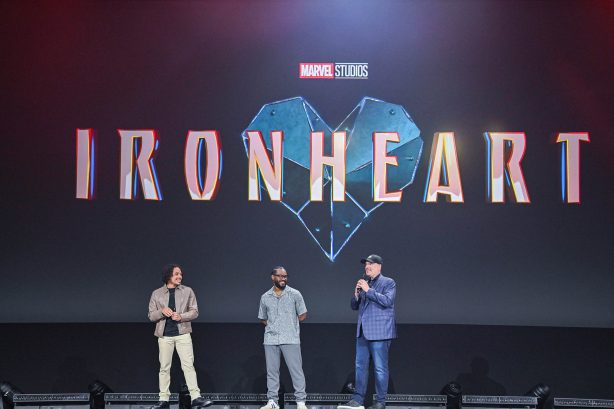 Coogler shared an early look at the new series he’s executive producing that takes place after the events of Black Panther: Wakanda Forever. Dominique Thorne returns as Riri Williams, a young, genius inventor determined to make her mark on the world. Her unique take on building iron suits is both brilliant and flawed—and Ironheart delves into the dynamics of tech versus magic. Feige then invited series costar Anthony Ramos to the stage to greet fans and share a little about his character, Parker Robbins aka The Hood. The new series is slated for Disney+ in 2023. 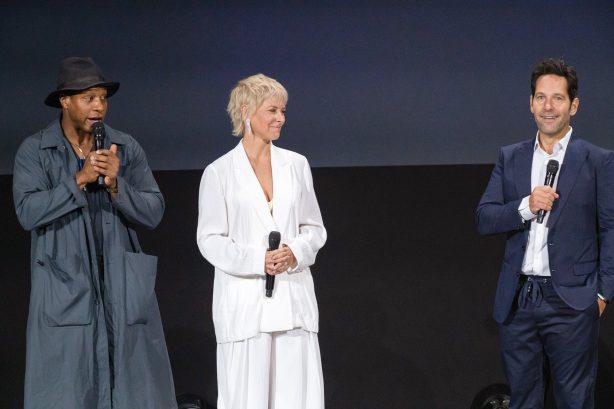 Ant-Man and the Wasp: Quantumania

Feige then officially kicked off Phase 5 of the MCU by bringing to the stage the stars of Ant-Man and the Wasp: Quantumania: Paul Rudd (Scott Lang/Ant-Man), Evangeline Lilly (Hope Van Dyne/The Wasp), and Jonathan Majors (Kang). The crowd was then treated to an exclusive look at the film, which follows Super Hero partners Scott and Hope, who team up with Hope’s parents, Hank Pym (Michael Douglas) and Janet Van Dyne (Michelle Pfeiffer)—as well as Scott’s daughter, Cassie (Kathryn Newton)—to explore the Quantum Realm, interacting with strange new creatures and embarking on an adventure that’ll push them beyond the limits of what they thought was possible. Hitting theaters February 17, 2023, the film connects to Avengers: The Kang Dynasty, Feige announced.

The special starts streaming on Disney+ this October 7.

Fan favorite Don Cheadle then joined Feige on the Hall D23 stage to talk about Secret Invasion, a thrilling new event series that showcases a faction of shapeshifting Skrulls who have been infiltrating Earth for years. They also revealed the series’ brand-new trailer:

Cheadle then segued into revealing details about another Disney+ project he’ll star in, Armor Wars. Rhodey fans will see the character in a whole new light, and considering the title of the series, audiences can look forward to all-new suits for the hero, featuring different types of armor. 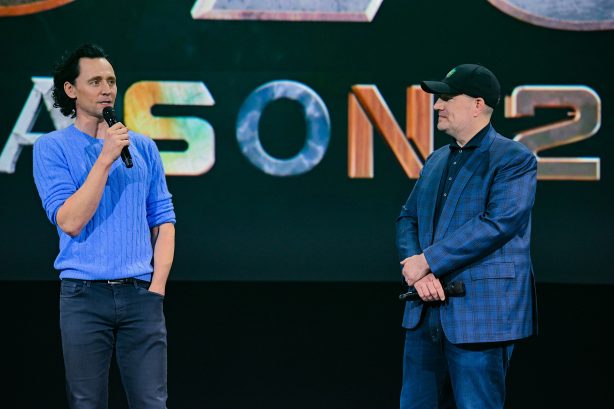 Feige then welcomed—direct from the set in London—Loki stars Tom Hiddleston, Owen Wilson, Sophia Di Martino, and new cast member Ke Huy Quan to chat about the new season. Fans were lucky to get a glimpse of what’s to come, picking up in the aftermath of the shocking season finale when Loki finds himself in a battle for the soul of the Time Variance Authority. Season 2 of Loki begins streaming on Disney+ in 2023.

Feige officially confirmed that Matt Shakman—who directed every episode of 2021’s WandaVision and who was in the Hall D23 audience—would be directing Fantastic Four. The film opens in theaters on November 8, 2024. 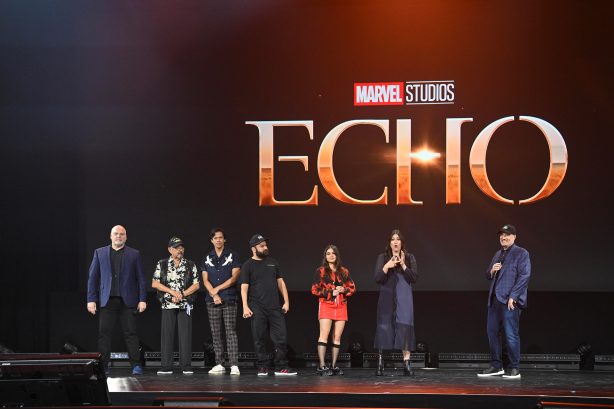 The cast of Echo—Alaqua Cox, Vincent D’Onofrio, Devery Jacobs, Graham Greene, Cody Lightning, and Chaske Spencer—joined Feige on stage to chat about the new series; show some sneak-peek footage to the crowd; and provide some details about Maya Lopez, whose ruthless behavior in New York City (after the events in Disney+’s Hawkeye) catches up with her in her hometown. 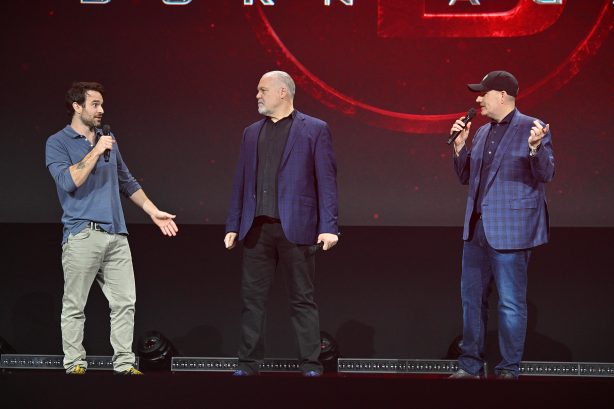 Once most of the Echo cast left, D’Onofrio remained on stage… and Hall D23 erupted with excitement when Feige welcomed Charlie Cox to join D’Onofrio to briefly talk about Daredevil: Born Again! Production isn’t underway yet on the 18-episode Disney+ series—but fans were treated with a clip from an upcoming episode of She Hulk: Attorney at Law (now streaming on Disney+) that features Cox’s superpowered hero. 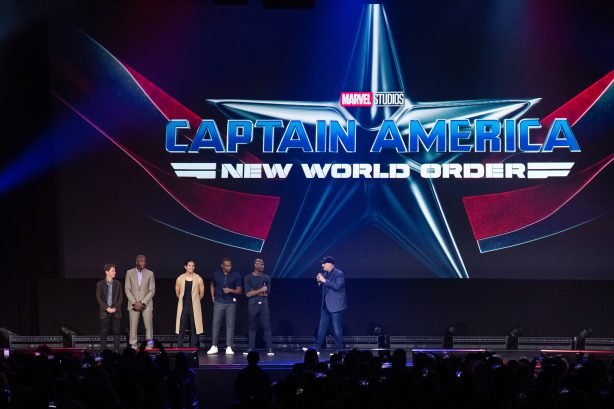 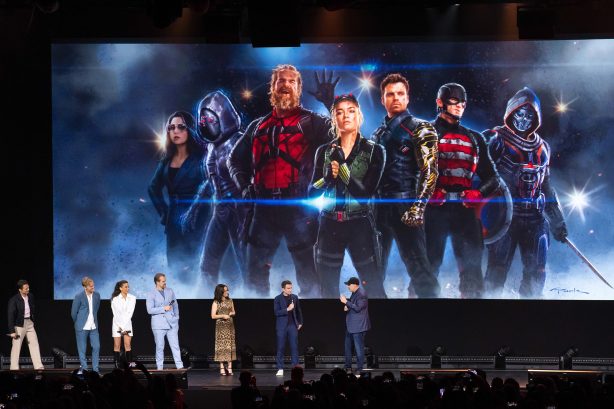 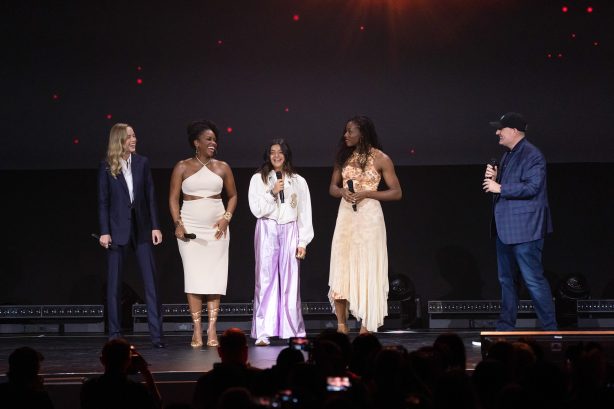 Finally, Feige wrapped the Marvel Studios portion by revisiting key moments in the MCU before welcoming to the stage director Nia DaCosta and The Marvels cast members Iman Vellani (Kamala Khan/Ms. Marvel), Teyonah Parris (Monica Rambeau), and Brie Larson (Carol Danvers/Captain Marvel). Fans were given a special look at scenes from the new movie, which opens in theaters on July 28, 2023. 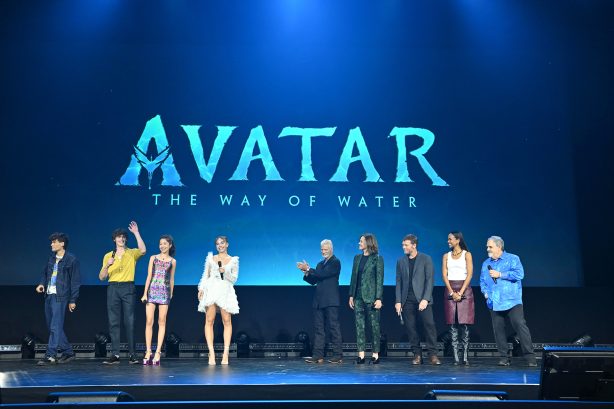 Avatar: The Way of Water