Monday Night Football begins its 43rd season tonight – its seventh on ESPN after airing on ABC for 36 years. Fans are counting down the minutes until the Cincinnati Bengals and the Baltimore Ravens kick off at 7:00 p.m. ET followed by the San Diego Chargers versus the Oakland Raiders at 10:15 p.m. ET. To help celebrate football fans’ favorite time of the year, we’re kicking off our first in a series of infographics that will provide a slightly different look at what’s happening around The Walt Disney Company.

Let us know what you think in the comments. Personally, I was most surprised to learn that the MNF production trucks travel 32,169 miles throughout the season. 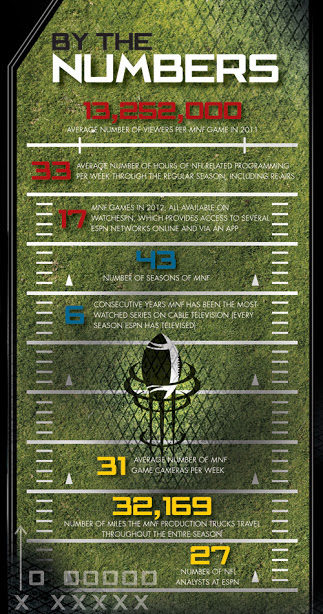