Ford v Ferrari, in theaters today, takes audiences from the unforgiving track of the 24 Hours of Le Mans motorsports race in France’s Loire Valley; to Dearborn, Michigan’s legendary Ford factory, commonly known as “The Rouge”; to the Maranello, Italy, home of Enzo Ferrari’s famed automotive company. But as viewers are transported, not just to these remote locales but to another era, they may be surprised to discover that these historic locations were recreated all around Southern California in 2018.

“I don’t think this movie could have been made anywhere else,” says the film’s production designer, François Audouy, who agreed with director James Mangold that Southern California was at the heart of the film. Ford v Ferrari depicts the epic rivalry between Henry Ford II and Enzo Ferrari to create the ultimate vehicle that could prevail in the ultimate race, but it’s centered on the turbulent friendship between Carroll Shelby (Matt Damon), a Le Mans champion turned designer and salesman, and his spirited test driver Ken Miles (Christian Bale). Both Shelby and Miles were based around Los Angeles during the 1960s, and Audouy sees Southern California as the “visual backbone” of the movie. 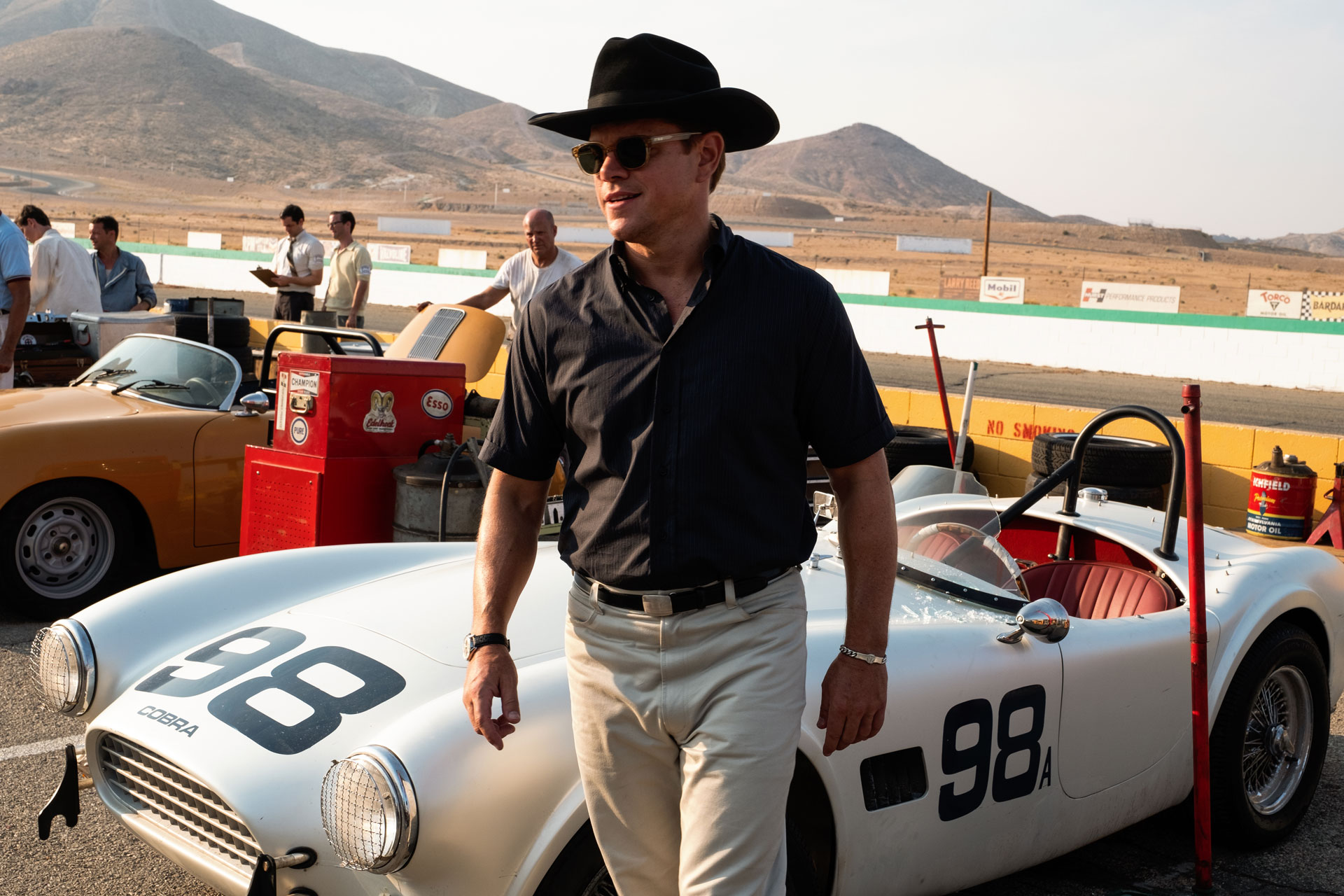 “It’s just so visually diverse as a shooting base,” says Audouy. “We were on the coast. We were at the beach. We were in the desert. We were at all sorts of interesting racetracks.” The production was also in downtown Los Angeles, where a 100-year-old former steel factory doubled for the Ford River Rouge Complex. Audouy brought a steel-blue color palate and rectilinear, mid-century architecture to his design for The Rouge, which housed the largest assembly line of the era. “It was an enormous set,” notes Audouy of the 15,000-square-foot warehouse structure that was outfitted with an assembly line and conveyor belt system, not to mention 20 Ford Falcons seen in various states of completion. The cars were completely authentic, sourced from a variety of used car sites, and all stripped bare or restored to look assembly line-new.

But as ambitious as it was to re-create The Rouge, Audouy describes the feat of recreating the start- and finish-line grandstands for Le Mans as “something that none of us had ever experienced before.” Audouy and his team painstakingly reimagined 1960s-era Le Mans at Agua Dulce Airpark, a private airport in Santa Clarita, California, basing the design largely on archival photos from the era, including many provided by the Automobile Club of the West in France, organizers of the 24 Hours of Le Mans. 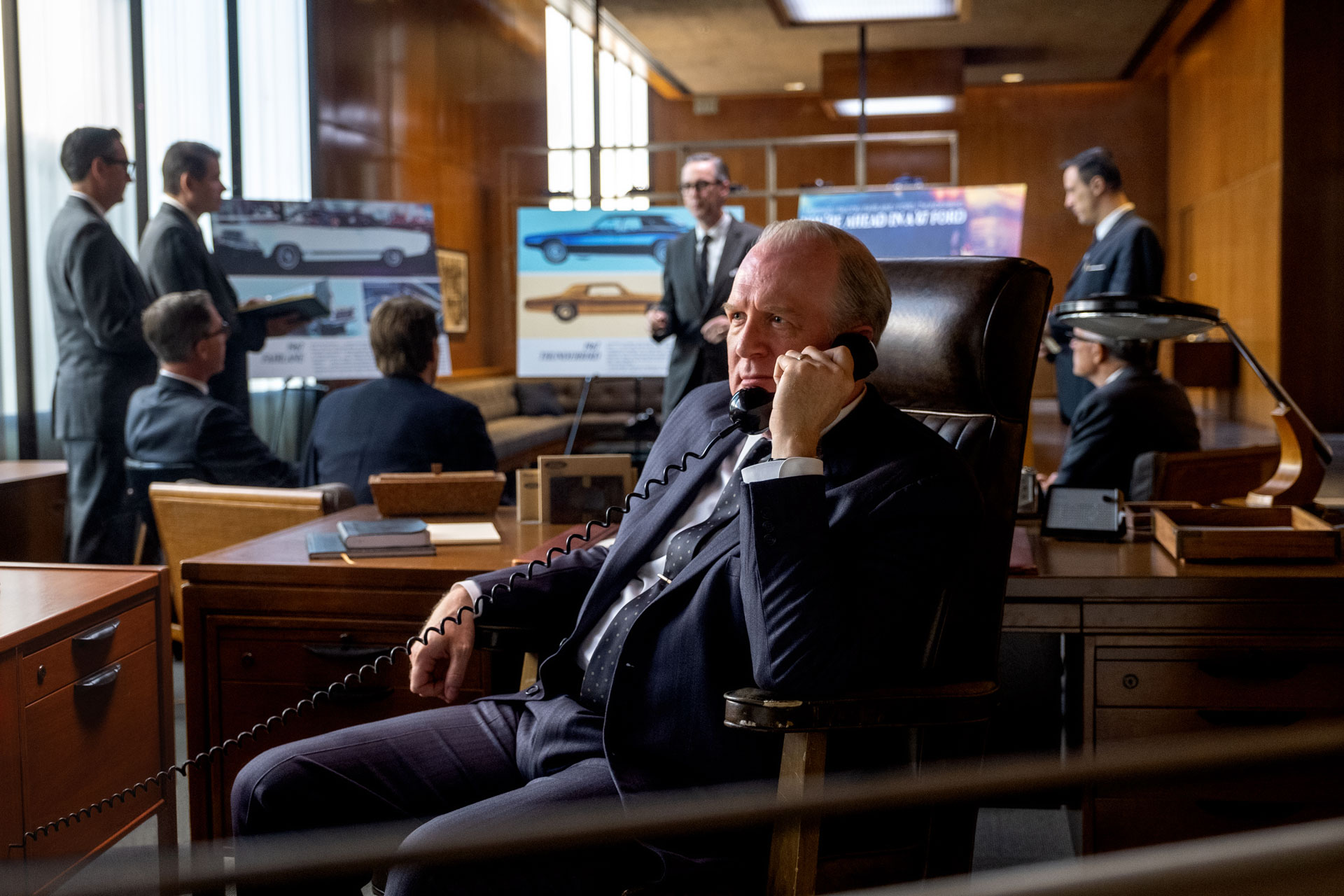 “It was a three-story set, about 700 feet long, interior and exterior, with 15 working pits with VIP suites above, as well as a full print media room and a live television broadcasting booth—plus we had cars going by at over 100 miles an hour on an airport runway that we had shut down,” Audouy details. Determined to be faithful to history, Audouy’s team recreated signage and details such as banners, race programs, stopwatches, spectator flags and pit tools exactly as they would have appeared in 1966.

Audouy’s research process included both archival material, such as photos and films from the era, as well as personal stories from people who actually witnessed this defining race. “[Ford v Ferrari] is about the pioneers of motor racing,” he says. “When the survivors who went through it, and their families came to the set, you could tell that it was very emotional for them to be able to see this part of history recreated, because it’s never really been shown before in a movie in this way.” 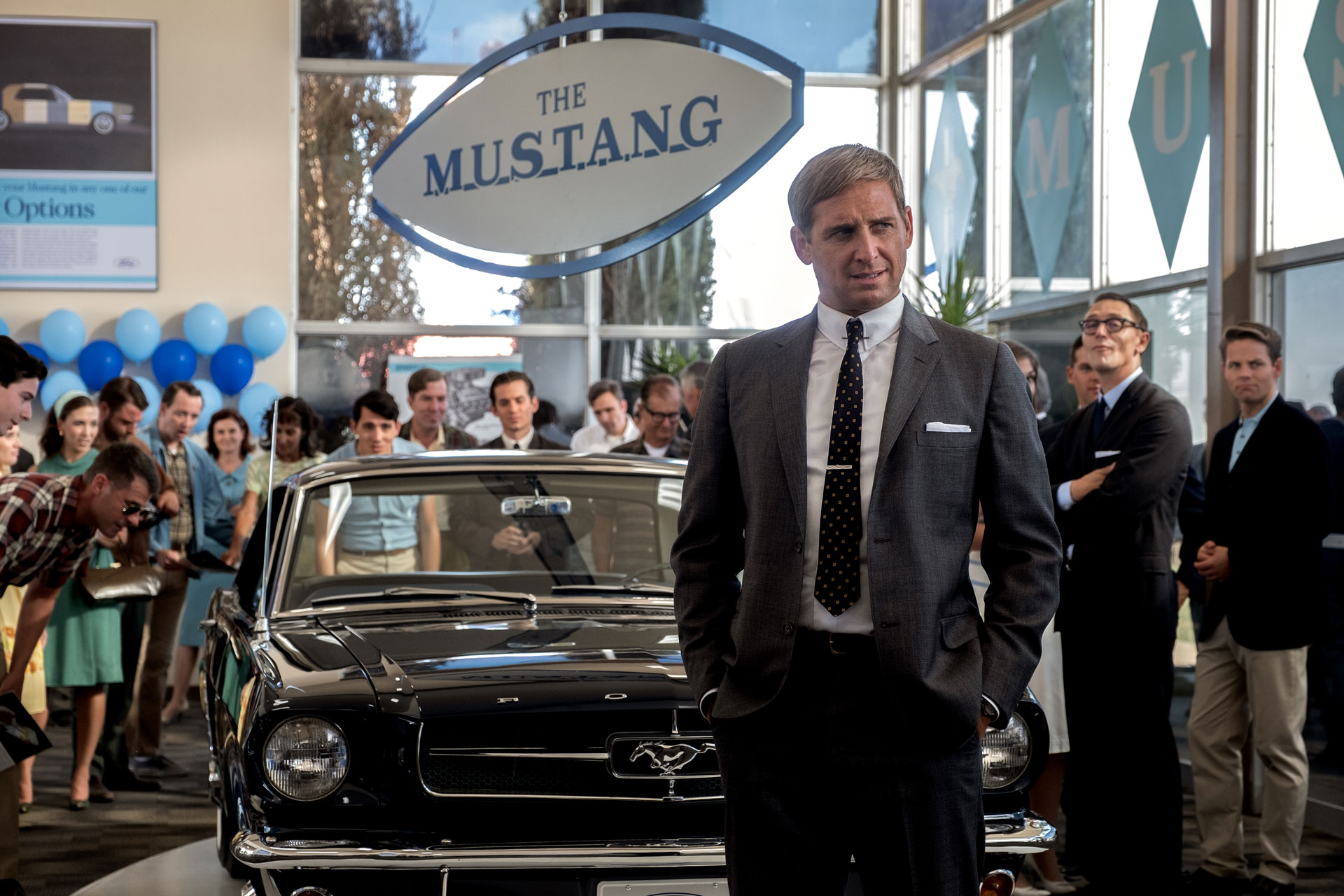 Though Audouy will frequently reproduce a historic location exactly, as in the case of the iconic gates of the Ferrari factory—which he recreated “brick by brick” at the Lanterman Development Facility in Pomona, California—he will also allow himself to be inspired by the period and his research. “As a designer, I’m trying to tap into the underlying truth of the location,” he explains. “I’m always trying to keep the audience engaged and in the narrative, and to do that, it’s about creating an emotion and keeping the illusion going.”

And Audouy has an unwavering respect for the level of detail that must go into maintaining that illusion. Many of the film’s race cars were custom built for the production, and the production design team was committed to ensuring that each replica was as authentic as possible. Audouy recalls working far into the night with members of his team, hand-gluing rivets onto Ferrari 250s. He acknowledges there is never a guarantee that such minute detail will even be noticed on screen but, he says, “And then when it is, it makes a difference.”