Guests visiting EPCOT at Walt Disney World Resort can blast off on an awesome intergalactic chase through time and space, as the brand-new family-thrill coaster Guardians of the Galaxy: Cosmic Rewind is now open. Not only is the attraction the longest fully enclosed coaster in any Disney theme park, but it is also one of the longest enclosed coasters in the world, covering more than 200,000 square feet. The innovative attraction is another major milestone in the ongoing transformation of EPCOT, debuting today as part of the Walt Disney World 50th Anniversary celebration.

Guardians of the Galaxy: Cosmic Rewind is the first Disney Omnicoaster, meaning its vehicles make controlled rotations to ensure guests are always engrossed in the action. Disney Imagineers advanced the Omnimover ride system (used for Haunted Mansion, The Little Mermaid: Ariel’s Undersea Adventure, and Spaceship Earth) to fulfill the attraction’s needs. “Our Disney Imagineers actually created this new technology and hold a patent as to how it is accomplished,” says Wyatt Winter, Senior Show Producer. “What makes it unique is the ability to program and control that rotation to specific locations or times and allow guests to focus on the show taking place around them.”

Winter continues, “It’s really an evolution of that original Disney ride system that has been around for decades [and was patented in 1968]. We wanted the idea of having specific vistas or views while on the ride, like Haunted Mansion has, but now do it at high speeds! Good ideas never really go away at Walt Disney Imagineering, and this shows that something good just continues to evolve and become something new.” 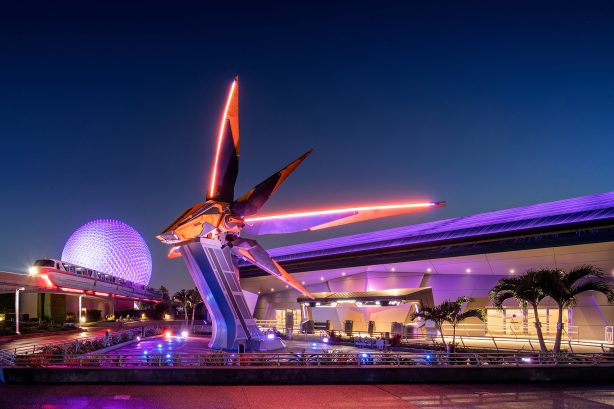 Part of the reason for advancing the existing technology—for which the Omnicoaster gets its name—is that Guardians of the Galaxy: Cosmic Rewind features the first the reverse launch for a Disney coaster. “We had the idea for a backwards portion of the attraction from the beginning, but talked about doing it in different ways,” says Winter. “Eventually, we landed on what we have now by utilizing the Omnicoaster capabilities.”

Ever since D23 Expo 2017, when plans for a Guardians of the Galaxy attraction at EPCOT were first announced, guests have been eager to join Star-Lord, Drax, Gamora, Groot, and Rocket on this one-of-a-kind adventure. As is so often the case, Disney Imagineers used that anticipation as their inspiration. “We knew we needed to create a fun, exciting ride system that matched the scale, excitement, and fun of the Guardians films,” Winter says. “We also wanted to create something new and unique that only Disney could do. Combining an all-new coaster with media, special effects, and music [an “Awesome Mix”] at a scale never before done was a fun and exciting goal for our team.”