The Walt Disney Studios recently teamed up with Southern California’s Discovery Science Center for the Frankenweenie Science Fair, putting the spotlight on young innovators from across the country in celebration of our latest movie collaboration with creative genius Tim Burton. 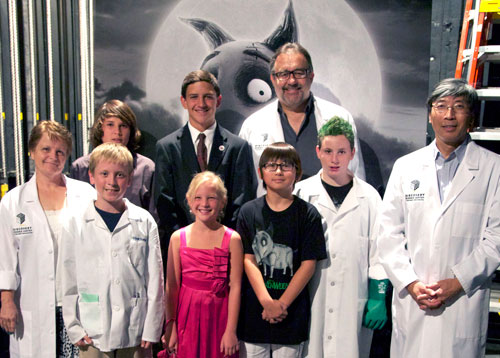 Like our Frankenweenie hero Victor, participants from grades 5-12 were encouraged to unleash their imaginations to create their own inventive science experiments! 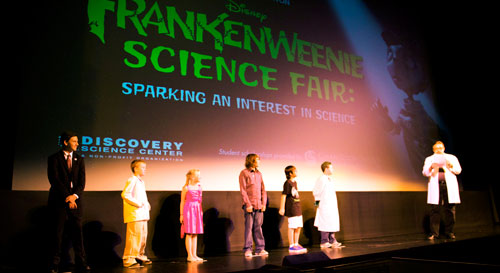 First place went to Science winner Colin Takeda of California, who built a microbial fuel cell that produced sustained electricity, generating almost 1/3 the power an AA battery for up to 90 minutes. This subject is currently being studied in Patrick Soon-Shiong’s NantWorks Institute at UCLA, and Patrick has invited Colin to spend a full day with scientists at the Institute!

Second place Creative winner Delaney Rice of Alabama impressed the judges with her imaginative three-dimensional model of a Disney-themed treehouse built on engineering principles. Delaney hopes to become an Imagineer when she grows up, and it looks like she’s well on her way.

Third place wound up with a tie in Traditional Science Fair category. Tre Risk of California experimented with reducing aquifer depletion through increased recycled water consumption, testing the best algae-resistant water source for golf courses and similar businesses. He went above and beyond the experiment itself, and now two Palm Springs golf courses are implementing strategies based on Tre’s results! Daniel Vitenson of California researched how tides and other natural factors affect the endangered clapper rail, turning over his detailed findings to the National Oceanic and Atmospheric Administration to further their investigation of why these birds are becoming extinct so quickly.

Each of the Grand Prize winners was awarded a behind-the-scenes tour of The Walt Disney Studios, and all six finalists received four Disneyland tickets each! You can see all of these young scientists’ work on display at the El Capitan throughout the month of October.