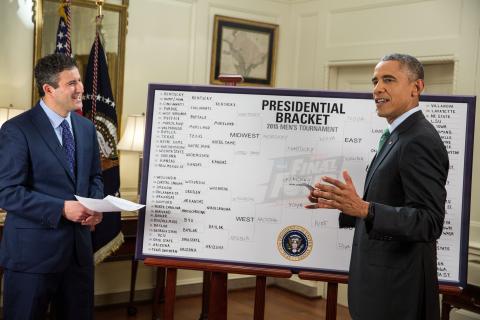 For seven years, a visit to the White House has been one rite of spring for ESPN.com senior basketball writer Andy Katz. He’s had the unique distinction of unveiling President Barack Obama’s bracket predictions for the NCAA Division I Men’s Basketball Championships onSportsCenter.

As the 2015 men’s tourney continued today, ESPN Front Row published Katz’ reflections on the overall experience of taping the President’s forecasts. The process has a special bonus this year: The President’s brackets for both the men’s tourney and the 2015 NCAA Division I Women’s Basketball Championships—ESPN analyst Rebecca Lobo taped that segment in the White House for her second consecutive year—eventually will be showcased in the Smithsonian.

“That shows how much this idea has blossomed,” he writes. Years ago, “there’s no way I would ever believe that asking then Sen. Obama in a conference room in Dunn, N.C., about filling out the bracket in the White House would turn into the National Museum of American History requesting the bracket boards.”

The President is not just an avid basketball fan: He has family ties to an ESPN analyst and to a player in the 2015 NCAA Division I Women’s Basketball Championships (of which all 63 tournament games are airing on ESPN platforms).  Read about that, Katz and Lobo’s experiences and see time-lapse video of ESPN’s White House set-up for the segments on ESPN Front Row.