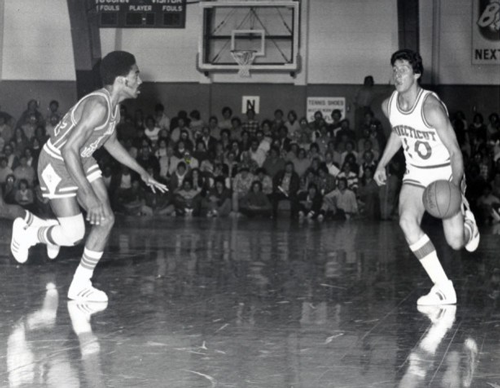 Basketball has been core to ESPN’s programming since even before there was an ESPN.

The photo above captures play from a game that aired five weeks before University of Connecticut and Athletes In Action; the exhibition match-up was telecast by what was then known as the E.S.P. Network to any cable system capable of receiving a signal from RCA Satcom 1.

More than 34 years later, the harvest continues for hoop fans over the holidays.

On Christmas Day, ABC and ESPN will combine to air all five NBA games played that day, beginning at noon ET.

On ESPN2, ESPN3 and ESPNU on Christmas Day, the men’s college basketball feast continues with various games from the Hawaiian Airlines Diamondhead Classic beginning at  2 p.m. ET. That’s just a segment of more than 1,450 men’s games ESPN will telecast this season.