You can “Seize the Day” in more ways than one with a new dance tutorial from Disney’s hit Broadway musical Newsies.

The video, which debuted in mid-July, is part of Disney Theatrical’s new “Get Up and Go” Wellness Program and proves you don’t need to be on a Broadway stage to practice your fancy footwork and get fit. It features easy-to-follow, step-by-step instructions for some of the show’s spectacular Tony® Award-winning choreography by Christopher Gattelli.

Promoting fun ways for kids to lead healthier lifestyles through dance, “Get Up and Go” is in support of the expansive Disney Magic of Healthy Living program, which in turn works hand in hand with the Let’s Move! initiative fostered by First Lady of the United States Michelle Obama, who offers a special message in the new Newsies video. 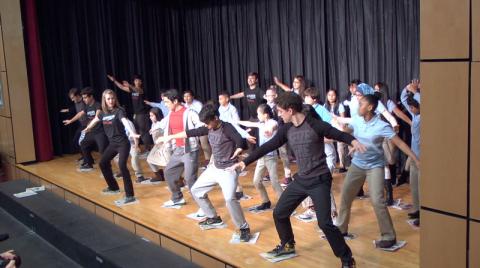 Since the beginning of the year, the cast of Newsies has been visiting schools to offer dance tutorials like the one in the video and chat with students about making healthy choices. They’ll take that show on the road to schools around the country along with the show whenNewsies begins its North American tour this fall. There’s even more to come too, with sessions from The Lion King and Aladdin on the way in 2015.

And with a name like “Get Up and Go,” what a great way to start the day!