Creativity is the heart and soul of Disney. We believe that if you can dream it, you can do it. As the White House kicks off the nationwide “Day of Making” today with its first-ever Maker Faire, we’re proud to join the celebration and support the next generation of makers and innovators. And, we are lucky to have a front-row view at the Faire! 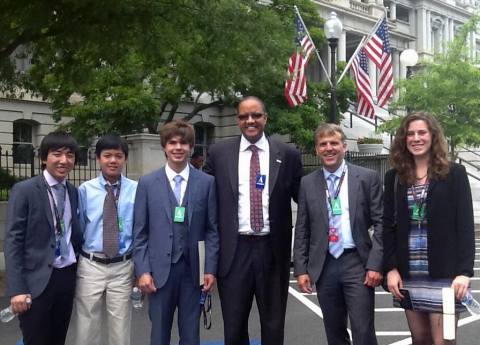 Along with Disney employees and cast members, a Maker Education Initiative team of four 8th and 9th graders from San Jose, California—supported and mentored by Disney and Pixar Animation Studios—were selected to attend the White House Maker Faire as “Honorary Makers.” “Team Grid” invented “The Grid,” a life-size version of the mobile app Flow Free. Instead of connecting circles using your finger, players are able to walk on tiles that light up as the game board reacts to steps. Matthew Tung, Davis Dunaway, Sami McGinnis and Andrew Ke developed the project and debuted it at the World’s Maker Faire in New York in 2013. 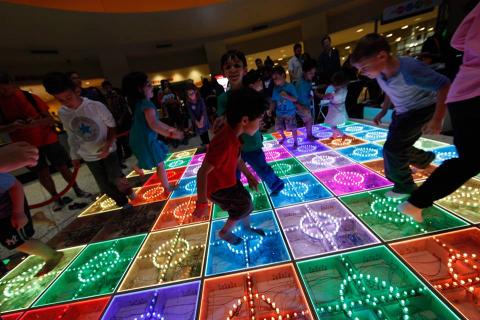 Today is a dream come true for the young makers.”It’s such a wonderful thing to see that others are just as excited about The Grid and making as we are,” Sami says about her team’s project. “To be at the White House with my team and surrounded by the best in DIY ingenuity is surreal.”

“The private sector is stepping up,” President Barack Obama told attendees at the Faire today. “From Indiegogo and Etsy to Disney and Intel, companies have pledged to help unleash a new wave of innovation here in America. And these companies do different things, they come from different industries, but they share the belief that when we tap the potential of every American, all of us are better off.”

The President added, “This is a country that imagined a railroad connecting a continent, imagined electricity powering our cities and towns, imagined skyscrapers reaching into the heavens, and an Internet that brings us closer together. So we imagined these things, then we did them. And that’s in our DNA. That’s who we are. And I hope every company, every college, every community, every citizen joins us as we lift up makers and builders and doers across the country.”

Beyond today’s celebration, Disney is investing more than $20 million this year in experiences, resources and tools that foster creativity in young people.

Continuing its longstanding support of the Maker Movement, Disney will once again be a title sponsor of the World Maker Faire in New York this September, which brings the best of do-it-yourself ingenuity to 75,000 kids and families. Additionally, Disney supports dreamers and doers through a wide variety of programs across the Company’s businesses and brands, which include Walt Disney Parks and Resorts, Pixar, Marvel, Lucasfilm, ABC and ESPN, among others. Initiatives range from Walt Disney Imagineering’s Imaginations, a design competition intended to seek out and nurture the next generation of Disney Imagineers, to Disney Friends for Change, a global program that inspires kids and families to make a positive difference in their communities through creative solutions and service.