On December 3, Disney Publishing Worldwide and Disney’s new streaming service, Disney+, will debut a spectacular collaboration: One Day at Disney. The new 224-page coffee table book and documentary series—unveiled this evening at D23 Expo 2019 by Ricky Strauss, president, Content & Marketing for Disney+, and Good Morning America’s Robin Roberts—will shine a dazzling light on the creative forces in front of the cameras and behind the scenes at The Walt Disney Company.

Earlier this year, Disney dispatched photographers to locations across the globe, from Shanghai Disneyland and ESPN to Pixar and the set of Modern Family, to capture images of the employees and cast members who drive creativity and innovation at The Walt Disney Company. The stunning images from these 76 unique photo shoots, along with the stories behind them, will be featured in the hardbound, collectible book, written by Bruce Steele, which is now available for pre-order. 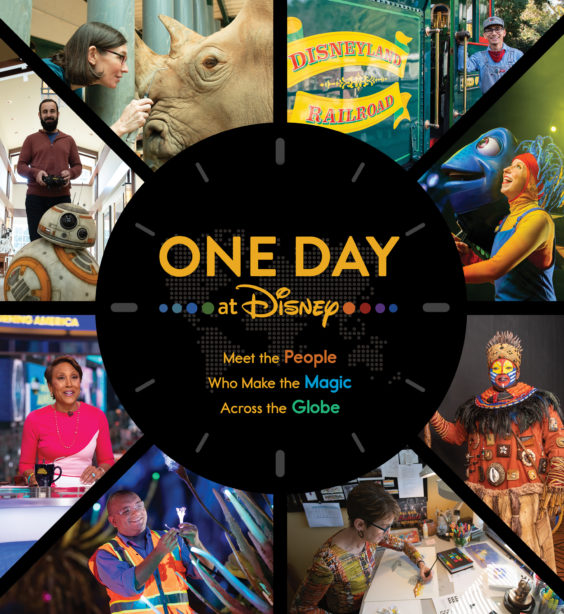 The new, 52-episode short-form series One Day at Disney will debut on Disney+ on December 3, the same day the book arrives in stores. A feature-length documentary will serve as the kickoff to the exciting new series, which takes an in-depth look at the unique and surprising roles these men and women call their daily jobs. Here are the talented individuals who will be profiled in the Disney+ docu-special (in alphabetical order):

More than 50 One Day at Disney Shorts will follow the debut of the special, each profiling a single remarkable person and their fascinating job. A new short will debut each week.

“Even though I said that no two days [at Disney] are the same, there is something that is similar,” Roberts said during tonight’s announcement. “One thing that remains the same, day in and day out, though everything else changes, is our desire to be as creative and as innovative as we can be—not just for ourselves, but for those [who] watch us and who consume what we do. And just try to make them feel as happy as we do.”

The series and documentary are from Endeavor Content’s Non-Scripted Division. Michael Antinoro and David Chamberlin serve as executive producers, with Victoria Chamlee producing.