Disney VoluntEARS in New York and California woke up with the same goal this morning – to help build a new playground in just one day. 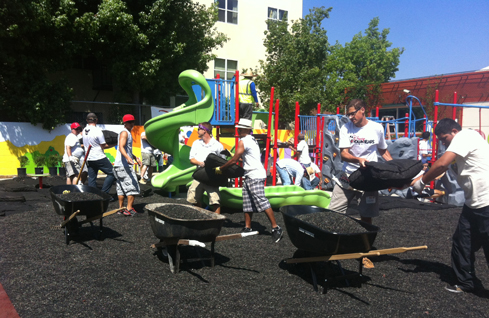 Disney VoluntEARS from throughout the company come together to give back to the communities where they work, live and play. I’ve participated in a KaBOOM! playground build as a VoluntEAR, and it was a great feeling to know that I was helping to create a new, safe place for hundreds of children to play.

Today in New York, more than 200 volunteers from local communities and ABC – including Sherri Sheppherd and Elisabeth Hasselbeck from ABC’s The View – transformed a dirt lot in the Bronx into a playground and garden inspired by drawings that local children created. The new facility will serve approximately 180 kids. 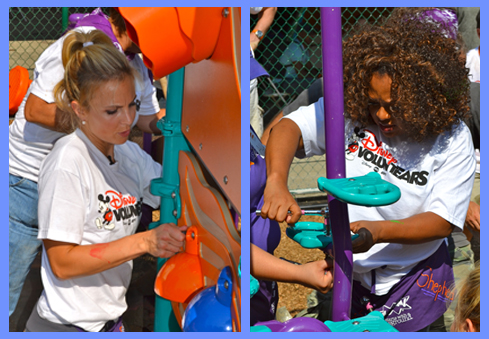 Meanwhile, a team in Los Angeles is bringing to life a new play area that will benefit more than 450 kids at Equitas Charter School. The playground is coming together as more than 200 community volunteers and Disney VoluntEARS roll up their sleeves, dig holes for playground posts, mix and pour cement and screw in the final nuts and bolts. 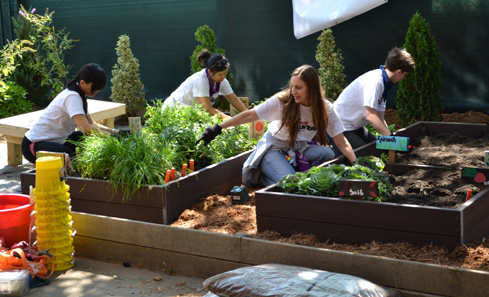 Since last year, Disney has pledged more than $3.5 million to KaBOOM! for new playgrounds and gardens. By the end of the year, community members, KaBOOM! and Disney VoluntEARS will have built 30 playgrounds in 25 cities across the country, including Anaheim, Boston, Bristol, New Orleans, Philadelphia and the Orlando area.

The builds are an extension of Disney Magic of Healthy Living, an initiative that partners with parents to inspire kids to live active and healthy lifestyles.

Disney makes it easy for its employees to get involved, and organizations like KaBOOM! make it fun too.

Check in with us tomorrow to see pictures of the completed playgrounds!