Los Angeles’s Center Theatre Group recently hosted a one-night-only performance, months in the making, that brought the lively audience inside the prestigious Ahmanson Theatre to its feet. The headliners for this exclusive event have yet to win Tony® Awards… or even graduate elementary school. Rather, the evening of musical theater starred 300 local grade school students who had just finished their first year participating in the Disney Musicals in Schools (DMIS), a free program developed by Disney Theatrical Group to bring theatrical programs to under-resourced public elementary schools in cities all around the U.S.

For years, Disney Theatrical Productions has licensed “junior” versions of beloved titles such as Aladdin and The Lion King to school groups and professional theaters. But in many parts of the country, schools simply don’t have the resources to stage a musical or provide theatrical education to their students, so in 2010, Disney Theatrical Group decided to do something about that. “Here we were in New York City, in the heart of Times Square, and schools in our own backyard in Brooklyn, in Queens, in the Bronx, Staten Island and Manhattan just weren’t producing these shows,” says Lisa Mitchell, education director for Disney Theatrical Group.

The Disney Musicals in Schools program was launched with the goal of developing sustainable musical theater programs in schools where there previously were none. Participating schools receive the performance rights to one of Disney’s half-hour musicals for kids, along with the corresponding show kit materials. But what really sets DMIS apart, Mitchell explains, is the support that the schools and their educators receive when they become involved with the program. “We send in a pair of what we call ‘teaching artists’ who are professional musical theater artists and also professional educators,” Mitchell says. The teaching artists work with the students but, more importantly, they’re mentoring the school educators and teachers. “So over the course of the six-month process, the teachers learn how to become music directors, directors, choreographers, producers, stage managers and designers, so that when we’re not there in the future they’ve got the training necessary to sustain this kind of work in the school for year after year after year.” 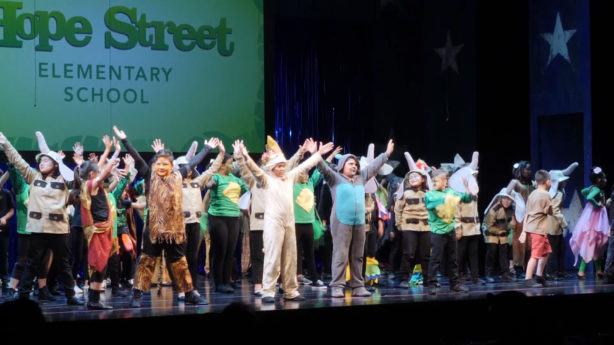 The program has been an unequivocal success. Just eight years in, DMIS has expanded to 18 cities—including the first international program, which launched in London this year—and some 30,000 kids have now performed in their first school musical through the program. The program culminates in each city with an annual Student Share Celebration that brings together all of the participating schools at storied venues such as Broadway’s New Amsterdam Theatre and Chicago’s Goodman Theatre. During the event, hundreds of children take the stage for a spectacular night of song, dance and, of course, Disney magic—beginning with a song written expressly for the Disney Musicals in Schools program by the legendary composer Alan Menken, “It Starts with a Dream,” performed together by all of the young actors.

As Mitchell has watched DMIS grow, she has marveled at how each city and theatre company is able to make the program their own. The Las Vegas DMIS program, done in partnership with Smith Center for the Performing Arts, features a number of teaching artists who perform with Cirque du Soleil, giving that city’s choreography an almost acrobatic-like quality; while in Nashville, shows created alongside the Tennessee Performing Arts Center feature musical talent that reflects the world-class music education program offered in the city’s public school system. “One of the things that surprises me most is how you can have two dozen versions of The Lion King take place on school stages around the country, and every single one of them—despite having the same script and the same score and the same plot—is completely unique to that school and that community,” Mitchell says.

As the video below demonstrates, the young DMIS participants learn performance techniques through the program that they’ll be able to draw upon as their schools’ theater education programs continue to grow. But Mitchell emphasizes, “More important than the stage skills they’re learning are the life skills: collaboration, empathy, creativity and communication.”

Educator Gabby Mendoza, who participated in Centre Theatre Group’s inaugural year with DMIS alongside her students at Humphreys Avenue Elementary School in Los Angeles, stresses that the program has had a transformative effect on students. “The students have discovered so much about the arts and themselves. It’s been a true journey, finding confidence week after week,” she says, and she notes that the teachers have reaped immeasurable benefits from the program, as well. “We’ve all been able to learn from each other, lean on each other, and discover strengths and passions in ourselves as educators. When we put our vision together, [we’ve seen] the powerful impact that the arts can have.”