The Walt Disney Company continued a 32-year tradition today, honoring 12 remarkable talents as Disney Legends in a special awards ceremony hosted by Disney Chairman and CEO Bob Iger at D23 Expo 2019 in Anaheim, California. Actor Robert Downey Jr.; visionary filmmaker Jon Favreau; multitalented performer Bette Midler and Good Morning America anchor Robin Roberts are among those honored this year for the significant impact they have made on the Disney legacy and who now take their place alongside iconic names such as Angela Lansbury, Marty Sklar, Dick Van Dyke and Barbara Walters. Since the program was established in 1987, fewer than 300 people have received the Disney Legends Award.

The Disney Legends Awards ceremony served as a spectacular start to the three-day D23 Expo 2019, a celebration of the creativity and innovation that drive The Walt Disney Company’s storytelling. The biennial event brings together all the worlds of Disney under one roof, allowing Disney’s most passionate fans to meet and hear from the incredible talent behind the Company’s latest and greatest movies, theme park attractions, television series and more. Guests at D23 Expo 2019 also will be able to preview Disney+ before it launches on November 12, through demonstrations of the streaming service as experienced across mobile and connected TV devices, and they’ll enjoy an exclusive first look at the exciting slate of original content that is planned for the service. 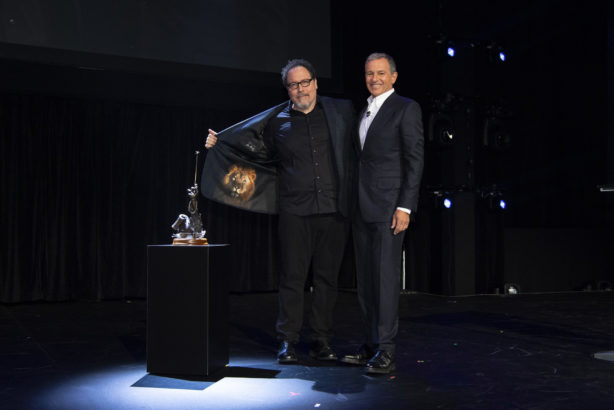 “This is an extraordinary time for our company, an era of sweeping and profound change—really not just for our company, but for the entertainment industry and the world, as well. Some find the pace of change a bit daunting. Frankly, we find it exhilarating. It inspires us to be more innovative and to raise the bar even higher on the quality and the variety of what we produce,” Disney Chairman and CEO Bob Iger said as he welcomed fans to this morning’s ceremony.

Visionary filmmaker Jon Favreau, who has been an important part of the Marvel Cinematic Universe as an actor, director and executive producer and has used groundbreaking technology to tell classic Disney stories in new ways, proved to be a passionate Disney fan with a deep knowledge of the Company’s history. “Walt Disney was the master of bringing the old myths and the magic of technology together to create indelible memories and create a culture that we all grew up in, that passed a set of values from one generation to the next,” he shared. Favreau admired the significance of the design of the Disney Legends statue, with its representation of ideas and inspiration, the craft, and, of course, magic. “I also love it because it’s from The Sorcerer’s Apprentice from Fantasia,” he said, citing a personal favorite. “As I’m on my path now from mouse to wizard, I thank Disney and all of you for the opportunity to tell these stories, to explore technology, and to help bring magic to the next generation.” 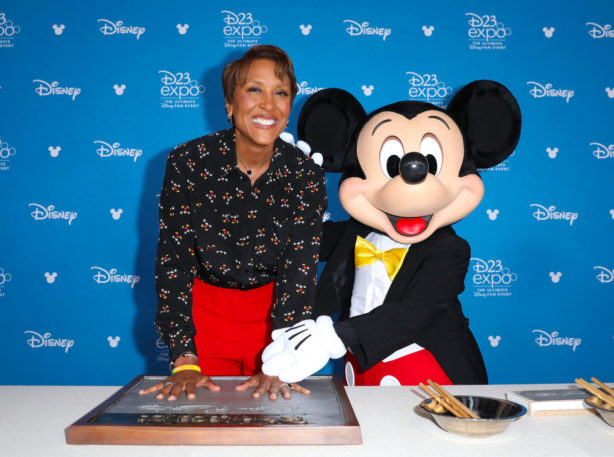 Good Morning America anchor Robin Roberts said, “I’ve always had this kind of connection with Disney,” recalling her first family trip to Walt Disney World as a young girl. “I was a pig-tailed little girl coming from Mississippi, I was in the car with mom and dad. We were driving to Orlando to see my sister Dorothy because she was an All-American Singer for Disney in 1976,” added Roberts, who was amazed by the ultra-modern Contemporary Resort and the nightly fireworks. “Every night was a reason for celebration,” she says. Now, as a Disney Legend, Roberts is delighted to return to a Disney park with her extended family, which includes siblings, nieces and nephews, and grandnieces and grandnephews. “It is wonderful to experience their first time at Disney and to see the magic,” she said. “It is truly a blessing to be a part of a company where all we want to do is touch people’s hearts—that’s all we want to do.”

When Downey first took flight as Iron Man in 2008, the Marvel Cinematic Universe launched, as well. “Playing Tony over these many years and the thematic idea that technology can guide our species toward enlightenment or destruction has been really worthwhile, and it’s an ongoing meditation. It’s been a great gift,” Downey said. “I get to remain a fan of the first inclusive and evolving cinematic universe ever, so far, and here’s to the future.”

“The award is the highest honor our company bestows on anyone, reserved for the artists and visionaries throughout our history who have pushed the envelope of creativity, challenged conventional wisdom and broken the restraints of the status quo in search of new possibilities,” Iger said.