Have you ever wondered what it feels like to sling webs like Spider-Man? If so, you’re not alone. It’s a dream many have had, and now it’s possible. WEB SLINGERS: A Spider-Man Adventure enables guests to do just that.

This new attraction—developed by Walt Disney Imagineering, the creative force that imagines, designs and brings to life all Disney theme parks, resorts, attractions and cruise ships worldwide—opens June 4, 2021 at Disney California Adventure park. It’s part of Avengers Campus, a land dedicated to recruiting and training the next generation of heroes that brings together the Earth’s Mightiest Heroes and their allies.

With beloved stories to tell, Disney Imagineers often use new technology to create experiences like no other. 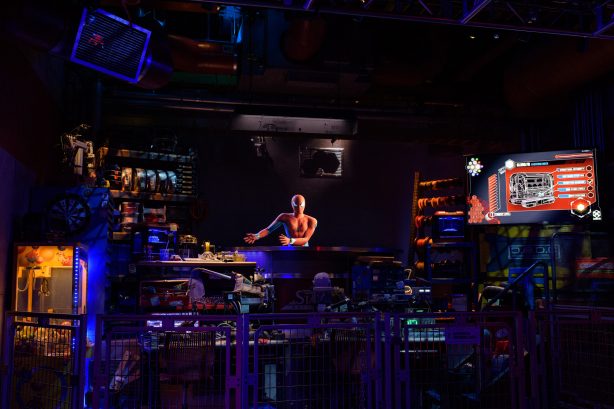 WEB SLINGERS: A Spider-Man Adventure takes guests on an interactive adventure that begins at Avengers Campus’ Worldwide Engineering Brigade—or WEB, as the kids call it—a workshop of bright inventors such as Peter Parker. The WEB Workshop is showcasing, among other inventions, Spider-Bots, designed to be robotic sidekicks capable of building anything a Super Hero might need,  but when Peter’s demonstration “bugs out,” mayhem ensues and guests are called to join Spider-Man on a mission to stop the bots with newly discovered web-slinging powers.

“We’re going to give you super powers,” said Brent Strong, executive creative director at Walt Disney Imagineering. “There’s not a kid who has read a comic or watched a TV show or watched a movie who hasn’t walked away wishing they could sling webs, and we’re going to make that happen for every single guest. The new technology can render a virtual web coming directly out of your wrist and into that world without touching an interface. It’s as close to being Spider-Man as you can get, and it’s really cool.” 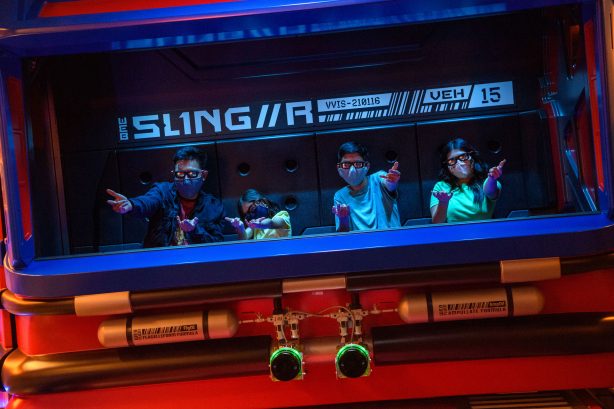 The attraction blends physical sets and virtual environments to take new recruits on the interactive escapade. Guestsshoot virtual webs from their wrists by making gestures with their hands and using natural motions that do not require wearable technology, other than 3D glasses. The web-slinging uses artificial intelligence, machine-learning and computer vision technologies—leveraging four Infrared cameras on each side of the vehicle to assess and analyze the actions of guests an incredible 60 times per second to track eye position, shoulders, elbows and wrists.

For example, when an arm stops moving forward, the attraction will map out the geometry of their web sling (based on shoulder and wrist positions), augmented by the location of their elbow. It then renders a 3D web in the interactive gameplay, based on eye position—and all of this happens in real-time.

The results are another example of Disney’s unique ability to use technology that heightens its craft for storytelling. Millions of guest will experience WEB SLINGERS: A Spider-Man Adventure. When a guest steps off the attraction, they will have lived what at one time only existed in their imagination. That’s making the impossible, possible.