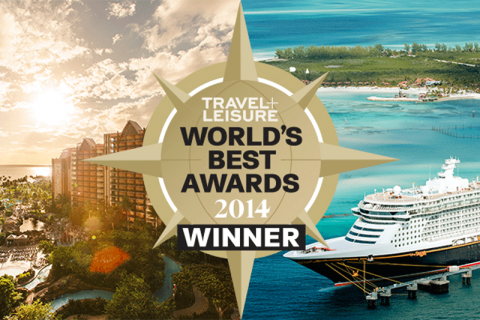 At Walt Disney Parks and Resorts, we are committed to quality guest service and creating lasting memories for our guests. And when we learned that Disney Cruise Line and Aulani, a Disney Resort & Spa, earned top distinctions from Travel + Leisure readers for their World’s Best Awards 2014, we were honored. These awards are just a few of the many that we have received for Walt Disney Parks and Resorts and it would not be possible without the amazing cast and crew members around the globe who make the Disney magic happen for our guests every day.

Since 1998, Disney Cruise Line has established itself as a leader in the cruise industry and has fittingly been in the World’s Best Awards for several years now. However, this year is the first time the cruise line was named the Top Mega-Ship Cruise Line, a testament to the world-class hospitality and legendary service our crew members provide. And the line was once again named the Top Mega-Ship Cruise Line for Families. Readers rated cruise lines on several different criteria, including cabins, food, service, itineraries/destinations, excursions/activities and value. With a fleet of four ships—the Disney Magic, Disney Wonder, Disney Dream and Disney Fantasy—guests sailing with Disney Cruise Line can experience itineraries to the Caribbean, Bahamas, Hawaii, Alaska and Europe, among others.

Aulani, a Disney Resort & Spa, was named the Top Hotel for Families in the United States by Travel + Leisure readers. Located at the picturesque Ko Olina Resort & Marina on the western side of Oahu, it’s the perfect place for families to experience the rich culture of Hawaii. Readers identified Aulani as the best in travel based on its rooms, location, service, food and value. This news comes just in time for Aulani to celebrate its third anniversary coming up in August.

These esteemed awards are voted by discerning readers—the vacation experts!—and speak to the delight guests experience on a Disney vacation.