Yesterday, we gave an inside look at our Heroes Work Here initiative through the lens of Kevin Preston, director of veteran initiatives for The Walt Disney Company. Today, we’re excited to share an update that furthers the program’s reach.

At our annual Shareholder Meeting this morning, Disney Chairman and CEO Bob Iger announced that the company surpassed its goal to provide 1,000 career opportunities for returning U.S. veterans over a three-year period – hiring more than 1,300 veterans in just one year.

As a result, Bob shared a new goal to hire an additional 1,000 U.S. veterans over the next two years. 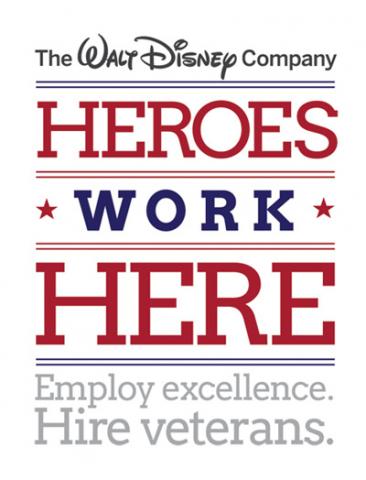 Last year, Heroes Work Here also kicked off a national public awareness campaign with two spots made up entirely of The Walt Disney Company veteran employees. This multi-million dollar campaign has run on ESPN, ABC, and our other media outlets since March 2012. To extend the campaign, we’re debuting a new public awareness video today.

Additionally, Disney will continue to invest in select nonprofit organizations that provide training and other support services for veterans. Over the past 10 years, Disney has donated more than $1.2 million to the USO alone.