Today, fans inside Hall D23 at D23 Expo 2019 in Anaheim, California, were the first to learn of six new series in development for Disney+ and discover key details about the highly-anticipated streaming service. The star-studded event featured in-person and video appearances from the stars of Disney+’s slate of originals from Disney, Pixar, Marvel, Star Wars and National Geographic, and included sneak peeks, trailer premieres and exclusive news about the service and its upcoming projects.

“With less than three months until launch, Disney+ will soon entertain and inspire audiences of all ages for generations to come, and we’re excited to preview some of the amazing original content being created for the service exclusively from our world-class brands today at the D23 Expo,” said Kevin Mayer, chairman of Disney’s Direct-to-Consumer & International segment. “Storytelling is the cornerstone of The Walt Disney Company and we’re thrilled to unveil a new slate of original shows from the Star Wars and Marvel cinematic universes, along with popular television franchises set to return with all-new series streaming only on Disney+.”

With the streaming service set to debut on November 12, many of the stars, filmmakers and creatives behind Disney+’s original movies and shows that will be available at launch were in Hall D23 today for the first public preview of the eagerly anticipated content. Six new trailers were seen for the first time today at D23 Expo 2019, along with a first look at an animated shorts series from Pixar: 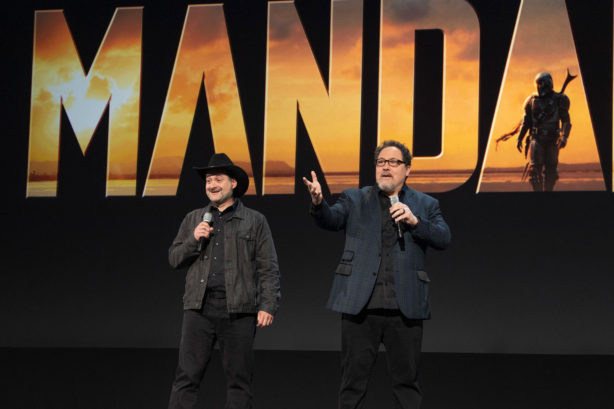 As Lucasfilm ventures into Star Wars episodic live action for the first time in history, Lucasfilm President Kathleen Kennedy told Disney fans, “It’s both exhilarating and liberating to be able to tell stories that expand beyond two hours, and the quality of our episodic series for Disney+ will be identical to our feature films.” Brand-new Disney Legend Jon Favreau and his fellow executive producer Dave Filoni were joined by series stars Pedro Pascal, Gina Carano, Carl Weathers and Giancarlo Esposito—as well as Taika Waititi, who brings the droid IG-11 to life—to premiere the teaser trailer for the first-ever Star Wars live-action series, The Mandalorian.  Additionally, earlier today, Disney Chairman and CEO Bob Iger also announced that new Disney Legend Ming-Na Wen will join the cast of the series. Set after the fall of the Empire and before the emergence of the First Order, the series follows the travails of a lone gunfighter in the outer reaches of the galaxy far from the authority of the New Republic.

Ahead of a screening of the first episode of the 10-episode scripted series at D23 Expo 2019, the cast of High School Musical: The Musical: The Series performed the multi-platinum hit song “We’re All In This Together” to kick off the Disney+ presentation in Hall D23. The series, set at the real-life East High, where the original movie was filmed, follows a group of students as they countdown to opening night of their school’s first-ever production of High School Musical. 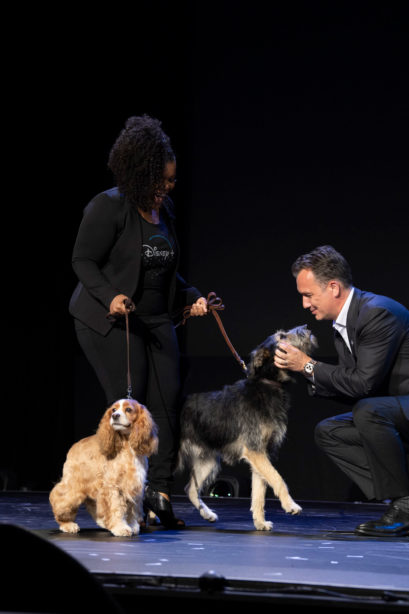 Lady and the Tramp

The canine stars of the film—Rose (“Lady”) and Monty (“Tramp”)—helped premiere the first trailer from the original film. In the timeless re-telling of the 1955 animated classic, a pampered house dog and a tough but lovable stray embark on an unexpected adventure and, despite their differences, grow closer and come to understand the value of home.

Stars Anna Kendrick and Billy Eichner unveiled a trailer for the film that will premiere on Disney+ on November 12. In the upcoming holiday comedy, Kris Kringle’s daughter is full of Christmas spirit and holiday fun, but wishes she could do something “important” like her beloved brother Nick, who will take over from their father this Christmas. When Nick is about to crumble like a gingerbread cookie from all the pressure, Noelle suggests he take a break and get away… but when he doesn’t return, Noelle must find her brother and bring him back in time to save Christmas.

The World According to Jeff Goldblum

Goldblum, the series’ star and host, offered a sneak peek into the upcoming series from National Geographic… where nothing is ever as it seems.

From executive producer Kristen Bell, Encore! brings together former castmates of high school musicals for a reunion like you’ve never seen before, as they re-create their original performance years after they last performed it. 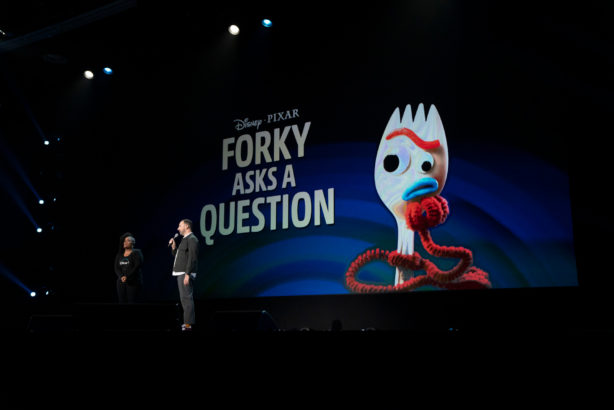 The 10-short series from Pixar Animation Studios is centered around craft project-turned-toy Forky from Toy Story 4, who ponders questions about how the world works, such as: What is love?… What is time?… And even, what is cheese? Actor Tony Hale, who voices the title role, premiered the first short in the series, “Money,” today in Hall D23.

And looking beyond the November launch date, six new titles were announced for Disney+: 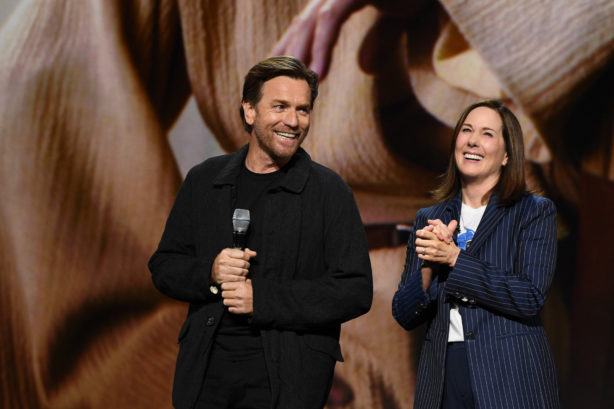 An untitled Obi-Wan Kenobi series in development from Lucasfilm will star Ewan McGregor, who made a surprise appearance on the Hall D23 stage to announce his return to the role of Obi-Wan Kenobi.

Marvel Studios is developing three new live-action series from Marvel comics. Kevin Feige announced that Ms. Marvel, Moon Knight, and She-Hulk are coming to the streaming service. “The opportunities that Disney+ is bringing to the MCU [Marvel Cinematic Universe] to grow and to evolve and to expand are tremendous,” Feige said. 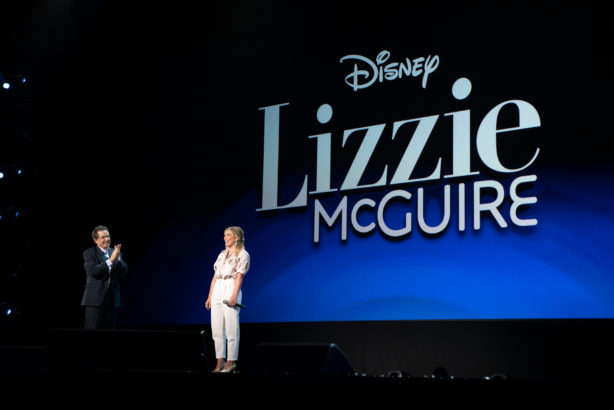 An all-new Lizzie McGuire series will once again feature Hilary Duff in the role that she made famous. Terri Minsky, who created the original Lizzie McGuire, returns for the new series.

Muppets Now will star Kermit the Frog, along with Miss Piggy and the Muppets gang, who bring their own special blend of mayhem and laughter to Disney+ in the unscripted short-form series.

Post-launch, an exciting and robust lineup of content is planned for Disney+, and stars of the upcoming projects shared new details about films and shows that will launch in the coming months, including:

Timmy Failure: Mistakes Were Made

In a first look, fans met the quirky Timmy Failure, who operates his own detective agency in Portland—with the help of his 1,500-pound polar bear, as well as a very unique, deadpan sense of humor. Launching in early 2020, Timmy Failure: Mistakes Were Made is directed by award-winning filmmaker Tom McCarthy from a screenplay by McCarthy & Stephan Pastis, and based on the best-selling book series by Pastis.

The untold true story  is an exhilarating and uplifting adventure set in the winter of 1925 across the treacherous terrain of the Alaskan tundra. Togo stars four-time Oscar® nominee Willem Dafoe, along with Julianne Nicholson, Christopher Heyerdahl, Richard Dormer, Michael Greyeyes, Michael McElhatton and Michael Gaston. Ericson Core directs from a screenplay by Tom Flynn. Kim Zubick is the producer.

Diary of a Female President (Premiering in January)

Gina Rodriguez executive produces (and is a recurring guest star) on the half-hour single camera series that follows a 12-year-old Cuban-American girl’s journey through the trials of middle school, which set her on the path to ultimately become president of the United States. Tess Romero stars as Elena. 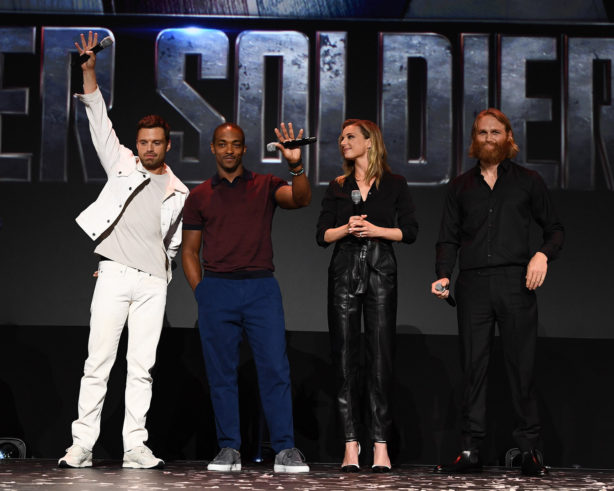 The Falcon and The Winter Soldier (Launching in 2020)

Following the events of Marvel Studios’ Avenger: Endgame, Falcon and the Winter Soldier (played by Anthony Mackie and Sebastian Stan, respectively) team up. During today’s presentation, Kevin Feige revealed that Emily VanCamp will reprise her role as Sharon Carter, and introduced Wyatt Russell, who will portray John Walker—a Marvel Comics character—for the first time on screen. The series is directed by Kari Skogland and Malcom Spellmen serves as head writer. 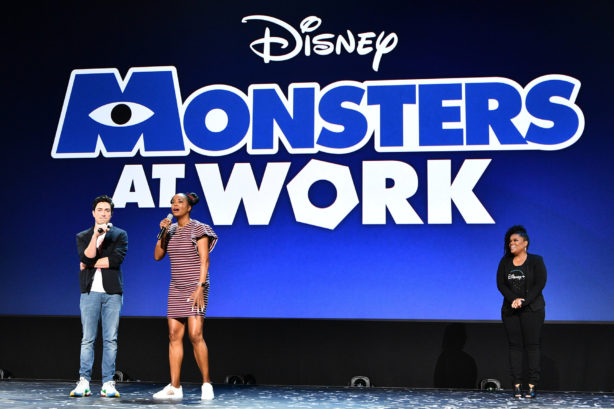 The new series from Disney Television Animation takes fans back to Monstropolis and follows a new cast of monsters—including Tylor (played by Ben Feldman) and Millie (played by Aisha Tyler)—in the series inspired by Disney and Pixar’s Oscar®-winning feature film Monsters, Inc. Monsters At Work will feature special appearances from the film’s beloved buddies, Mike and Sulley, who will again be voiced by Billy Crystal and John Goodman. Today, Feldman and Tyler shared a special look at their characters with fans at D23 Expo 2019. 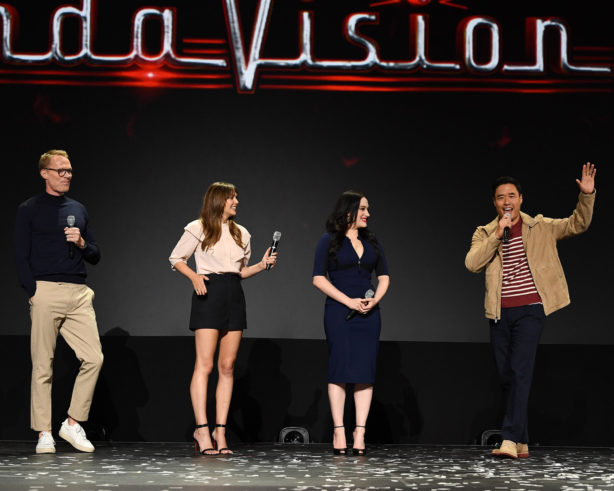 As Vision and Wanda Maximoff, Paul Bettany and Elizabeth Olsen play two super-powered beings trying to live ideal suburban lives… until they begin to suspect that things are not as they seem. Kat Dennings and Randall Park will reprise their roles from Thor and Ant-Man and The Wasp, and they’ll be joined by Kathryn Hahn (who will play a new character in the series). Matt Shakman serves as director, with Jac Schaeffer on board as head writer.

Tom Hiddleston returns to play the fan-favorite villain Loki in a series set after the events of Avengers: Endgame. Kate Herron directs the new series centered around the god of mischief, with Michael Waldron as head writer.

The animated series from Marvel Studios’ focuses on different heroes from the Marvel Cinematic Universe and imagines what happens if the events in the films had different outcomes. Haley Atwell, who will voice Peggy Carter in What If…? joined director Bryan Andrews and head writer Ashley Bradley today in Hall D23.

The Emmy® award-winning animated series will return with 12 all-new episodes and will mark the return of classic characters Anakin Skywalker, Obi-Wan Kenobi and  fan-favorites Ahsoka Tano and Captain Rex.

Diego Luna (Cassian Andor) and Alan Tudyk (K-2SO) reprise their roles from Rogue One: A Star Wars Story in this, the second live-action series from Lucasfilm for Disney+. The series, currently in development, follows Andor’s adventures as a rebel spy during the formative years of the Rebellion, before the events of A New Hope.

Guests at D23 Expo 2019 have the opportunity throughout the three-day event to experience the Disney+ app, complete with features and functionality confirmed for the global launch dates in November.

For a monthly price of $6.99 USD or an annual rate of $69.99 USD, Disney+ offers viewers of all ages a compelling price-to-value proposition, with a consumer-friendly experience that’s easy-to-navigate with personalized recommendations, high-quality and commercial-free viewing, up to four concurrent streams and unlimited downloads with no up-charges.

The Disney+ app experience, available to consumers on November 12, will feature: