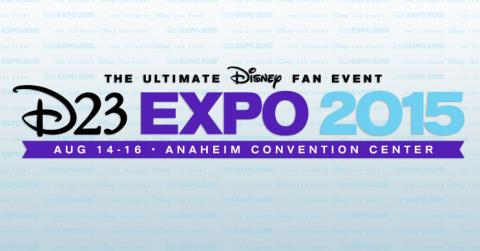 On Thursday, August 14, at 10 a.m. PT, D23: The Official Disney Fan Club will begin selling tickets for the next D23 Expo, which will take place August 14–16, 2015 at the Anaheim Convention Center. The largest Disney fan event in the world, the D23 Expo celebrates all the wonderful worlds of Disney entertainment, uniting all parts of The Walt Disney Company under one roof, including The Walt Disney Studios (including Marvel, Pixar and Lucasfilm); Walt Disney Parks and Resorts; Disney Consumer Products; Media Networks (including ABC, Disney Channel and Radio Disney) and Disney Interactive. D23 Expo 2015 marks the fourth bi-annual event held in Anaheim.

More than 65,000 Disney fans from around the world gathered at the Anaheim Convention Center in 2013 for the third D23 Expo. Once again, the Expo will celebrate the past, present and future of Disney with live events, celebrity appearances, panels, presentations, sneak peeks and immersive experiences.

D23 Expo 2015 marks the return of fan favorites including the Disney Legends Awards, honoring the talented men and women who have made indelible contributions to the Disney legacy; and Treasures of the Walt Disney Archives, which spotlights costumes, props and set pieces from Disney’s rich history.

As in previous Expos, D23 Expo 2015 will showcase all of the latest stars in the Disney universe. In 2013, celebrity appearances included Angelina Jolie, Chris Evans, Billy Crystal, Natalie Portman and Tom Hiddleston, with performances by Idina Menzel, R5 featuring Ross Lynch and a once-in-a-lifetime concert with Disney Legends Richard M. Sherman and Alan Menken. Additionally, Disney executives and creative talent came together to deliver special presentations, announcements and experiences to Disney fans throughout the three-day extravaganza.

In addition to these special advance-purchase savings, an extremely limited number of D23 VIP Sorcerer Packages will once again be available. Based on fan feedback, even more benefits have been added this year including exclusive opportunities in the Walt Disney Imagineering pavilion and Mickey’s of Glendale.

D23 Gold and Silver Members are entitled to early admission to the Expo show floor and D23 will once again give a special thanks to D23 Charter Members, providing them special access to the Expo’s Charter Member Lounge.