On November 13, Disney Theatrical’s The Lion King joined the rarified ranks only two other Broadway productions have previously achieved: Entertaining audiences for a full 25 years. Featuring songs by Disney Legends Sir Elton John and Sir Tim Rice, the show opened in 1997 at the New Amsterdam Theatre and has since moved to the Minskoff Theatre—where this extraordinary occasion was honored Sunday with a truly star-studded 25th anniversary performance.

Few shows can be passed down from one generation to the next—and with as much meaning—as Disney’s The Lion King, as illustrated in the new branded short film below. Created in partnership with ArtClass’ Jamaal Parham and Bashan Aquart (also known as the Brooklyn-based directing duo “Jams x Bash”), the vibrant, emotional short features the current Lion King cast and was filmed on location in New York City.

Not only has The Lion King been thrilling theatergoers for two-plus decades in New York City, but it’s been simultaneously bringing its tale of heart and home to audiences in over 100 cities in 21 countries, and on every continent except Antarctica. Performed over its lifetime in nine different languages (English, Japanese, German, Korean, French, Dutch, Spanish, Mandarin, and Portuguese), there are currently nine productions of The Lion King around the globe: Broadway, London, Paris, Hamburg, Madrid, Tokyo, on tour across North America, and on tour in the UK & Ireland, with a separate production touring internationally.

Never before has a show in its 25th year put on so many productions around the world simultaneously and placed in the Top 5 grossing Broadway shows this long (at nearly 1,300 consecutive weeks and counting). Currently, 115,000 people enjoy the show courtesy of those nine productions (on three continents) every week. All told, the show—produced by Disney Theatrical Productions (under the purview of Thomas Schumacher)—has now been seen by an astonishing 112 million people, and its worldwide gross exceeds that of any film, Broadway show, or other entertainment title in box office history. 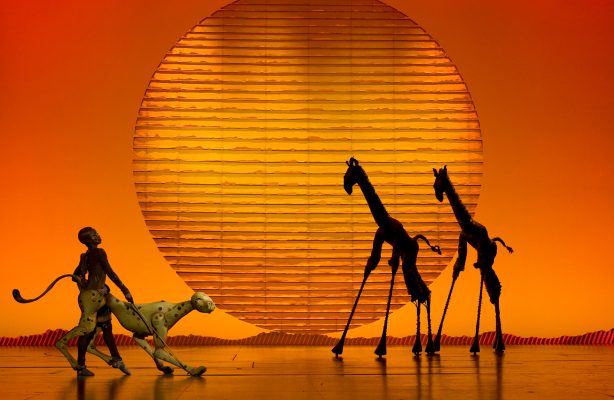 Incredibly, several other members of The Lion King’s current cast, orchestra, and artistic staff remain an integral part of its “Circle of Life”—a testament to the familial warmth that permeates the production. South African performer Lindiwe Dlamini, who joined the show during its summer 1997 pre-Broadway run, has been with the show’s triple-threat ensemble ever since. “When we first started, I had no idea what the show was going to look like,” she explains. “So, going through the audition process, and then starting rehearsals, we started to see the costumes, and I thought to myself, ‘How are we going to perform in these? How do we walk in a hyena costume?’ [It was inspiring] to see the whole thing unfold—learning all these movements; the singing, the dancing, [performing] with the puppets. The first day of previews came, and that’s when I thought, ‘Oh, we have something amazing here.”

Dlamini and those Minneapolis cast members are in a particularly exclusive group: they got to watch as audiences encountered the show—director Taymor’s soon-to-be-Tony-winning vision—for the very first time. “It was an experience that I wish a lot of people who perform in The Lion King [now] could experience,” she admits, “because it was the first time that people saw something this different in theater.” 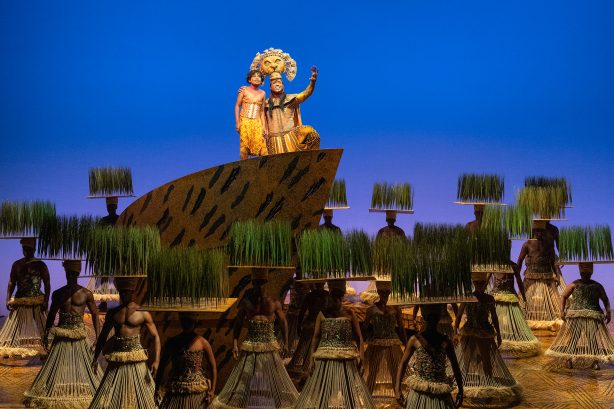 One of Dlamini’s Broadway castmates, L. Steven Taylor (currently starring as noble patriarch Mufasa), has been with The Lion King for 17 years and sees a definitive reason for the show’s longevity: its characters. “They may seem larger than life,” he says, “but I’ve always said that the thing that makes the show timeless is that the characters actually have real-world circumstances that are relatable to everyday people. And that changes, according to where you are in your life. Take my character, Mufasa, for instance; what parent can’t identify with wanting to impart some knowledge and wisdom onto their child, and then struggling to place responsibility on them without dimming their light? People go through phases and stages as they grow and evolve. And it’s kind of wild, because when you look at the show through the lens of 25 years [of life], the theme of evolution and growth—which is what our show is about—it’s represented right there, in the two-plus decades of the show.”

And the future of the show is as bright as that sun in its perpetual “sapphire sky,” thanks in part to the heartfelt tale at its very core. “At the crux of its longevity is the story,” says Kendra Moore—a longtime Lion King tour ensemble member who now works in the Broadway production’s Company Management office. “It’s a story we all connect to. It’s how we tell that story. It’s the incredible the vision that Julie Taymor had, of taking the movie to the stage. And it’s the people—not only the performers, the talented group of people who make up the show—but also the talented people behind the show, from the front of the house to the back of the house, to the people in marketing and ticketing. It’s not just one person who makes it so special; it’s the whole collective.”

Watch the video below for a look at this Sunday’s incredible anniversary celebrations:

The Lion King, now in its 25th year, is currently playing at the Minskoff Theatre in New York City—and in cities around the world. For more information, and to purchase tickets, visit lionking.com.