A beloved tale comes to the screen in a new and thrilling way in Disney’s Aladdin—opening in theaters today—which, under the direction of Guy Ritchie, reimagines the 1992 animated classic as a live-action action adventure. While staying true to the original film, the characters, including the charming street rat Aladdin (played by Mena Massoud), the brave and self-determined Princess Jasmine (Naomi Scott) and the shape-shifting, wise-cracking Genie (Will Smith), have been reimagined with modern sensibilities. The same holds true for Aladdin’s iconic songs and score, which have been revisited by Disney Legend Alan Menken, who brings a contemporary update to the songs and Oscar®-winning score he composed nearly three decades ago.

Menken took great care to protect the original music and excitedly took on the challenge of making “textural” changes to the score so that it would be better suited for a high-speed chase through the streets of Agrabah than a hand-drawn animated sequence. “In animation, you’re drawing on a much more melodically driven score, and certainly back in 1992 I was still doing quite a bit of what we called ‘Mickey Mouse-ing,’ which is using music almost as sound effect. That was part of the tradition that goes all the way back to the earliest days of Walt,” he shares. 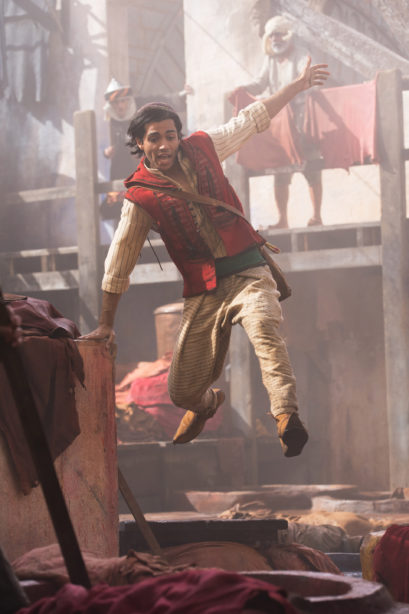 Though the score for the live-action Aladdin is rich with melodic cues, it is more percussive and its motor is driven by action adventure. As he set out to reflect the look and style Ritchie intended for the film, Menken balanced between two poles: “I want to pull as much as possible toward the ‘Musical’—with a capital M—and a Guy Ritchie action-adventure, romantic movie.”

Menken and his team, which includes music producer Matt Sullivan and music arranger Christopher Benstead, incorporated pop elements into the kinetic number “One Jump Ahead,” which they approached as more of an action sequence than a dance number. The arrangement for the Academy Award®-winning ballad “A Whole New World” is much more minimal in the live-action film than it was when an animated magic carpet first took flight. And Menken credits Will Smith as an architect behind the new versions of the Genie’s tours de force, “Friend Like Me” and “Prince Ali.” “He brought such new light to the songs. He brought his personality and his style to them the same way Robin Williams did,” Menken says. 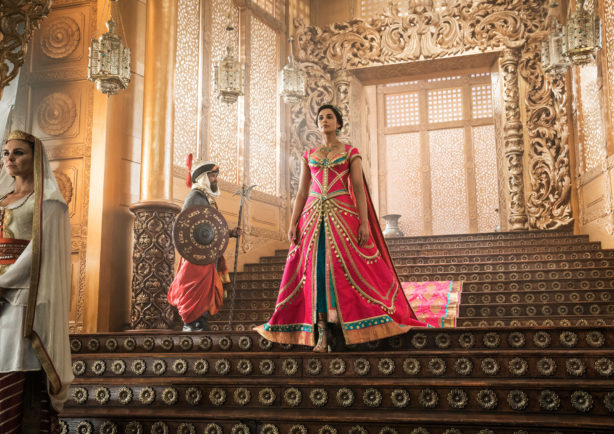 Aladdin also debuts a new song written by Menken with the Oscar- and Tony Award®-winning team of Benj Pasek and Justin Paul (The Greatest Showman, La La Land). “Speechless” is sung in the film by Jasmine as the princess fights to find her voice. “She’s a flesh-and-blood three-dimensional young woman who wants to be heard and wants to be respected, and the song needs to reflect that,” Menken emphasizes. Working together, Menken says that he and Pasek and Paul set out to craft a song that would live in both the pop music world and within the world of Aladdin. “They came back with a staggeringly beautiful lyric,” he says. A demo was recorded and Menken says of “Speechless,” “It definitely raised the bar for the entire movie in a big way and from that point forward, it was a matter of making sure that the movie supported the emotion in that song—that the storyline laid the right pipe so that we were ready for it.” Menken, Pasek and Paul discuss their collaboration on “Speechless,” in the “Music of Agrabah” featurette, below:

Menken finds it humbling to see how the songs and music he’s created for films such as Aladdin, Beauty and the Beast, The Little Mermaid and more have been embraced by audiences and continue to come to life in new ways, whether on these Broadway stage or in a new interpretation on screen. He compares the feeling to the pride a parent feels upon seeing their children go out into the world and succeed. “These songs are living their lives,” he says. “I’m sort of there to help guide them along and the fact that I get the privilege of reinventing them a number of times is a new phenomenon. It’s a thrill.”