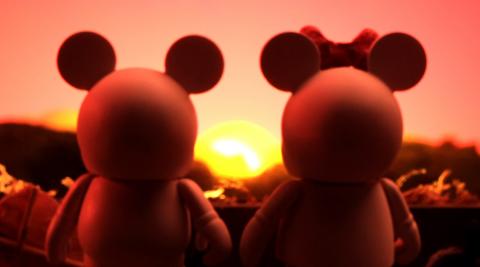 It’s a classic love story. Boy meets girl. Boy falls in love with girl, and they live happily ever after. But that’s where the similarity ends. Blank: A Vinylmation Love Story, our latest original stop-motion animated film, follows that timeless story arc… with a captivating, yet unconventional twist. Especially because the stars of the film look a bit different than your average cast of actors.

At three inches tall and made of vinyl, Blank—an unpainted outcast from a colorful, vibrant land—finds himself on a quest that alters his destiny while searching for his lost soulmate, Bow. We recently caught up with the film’s producer Matt Wyatt to hear about the development process of Blank: A Vinylmation Love Story. Since it’s world premiere last month on Google Play, thousands of people around the world have viewed the film.

What inspired the creation of Blank: A Vinylmation Love Story?
It was born in a very organic way. Some of the creators from our team had gotten their hands on Vinylmation, and they thought the figurines would lend themselves really well to stop-motion animation. They started doing some simple, rudimentary tests more than a year ago—from those initial tests, that grew into a pilot, a two-and half-minute-long little short film where we met for the first time Blank, our hero.

How does Disney create original content for the digital space?
It’s a really amazing space that we work in. The cool thing about Disney Interactive is that we’re able to play in many emerging and new platforms. We have the best of both worlds because we have the traditional platforms that Disney has always excelled in, and then we have people who are really knowledgeable about newer platforms—like Google Play, which is really new and doing amazing things in the space. What’s cool is the ability to reach a global audience with a tremendous amount of efficiency and relatively quickly as well.

What message and lessons do you hope viewers take away from Blank: A Vinylmation Love Story?
The film was created to be this epic adventure and also, it’s got something for for the entire family to enjoy. In conjunction with Google, we hope that people share moments from the film with their loved ones and find connection points with the film. At its heart, the film is about love obviously, but it also about creativity, self-expression, standing your ground and making a difference in the world.

What was it like to work with the Google team?
This is our first collaboration with Google, and the team has been an incredible partner. In the way that I’ve talked about the film being about creativity and expression, Google thinks of itself as a platform that lets people creatively express themselves on a global scale.