From the iconic whistle tune in Steamboat Willie to Fantasia’s magnificent score, music has always played a vital role in the story of Mickey Mouse. At Disney Television Animation (TVA), the musical team behind the award-winning Mickey Mouse cartoon shorts continues the tradition of musical storytelling in every comical episode. 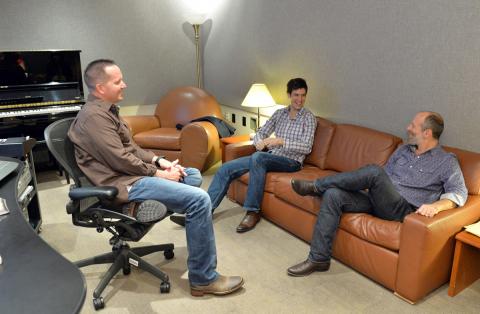 Jay Stutler, vice president, Music; Paul Rudish, executive producer and supervising director; and composer Chris Willis recently sat down with Disney Post to talk about their roles and what it takes to develop the melodies and sounds of the laugh-out-loud cartoon series.

Describe your role in one sentence.
Jay Stutler (JS): My role is the creative oversight of all of the music for all of Disney TVA productions.

Chris Willis (CW): I write the music for the Mickey Mouse shorts.

What is the process behind creating music for each episode of the Mickey Mouseshorts?
JS: Each episode involves two key sessions: spotting and preview. During a spotting session, we watch the episode with just dialogue, the completed animation and sound effects. Then we brainstorm what we want the episode to sound like. Chris then takes this discussion, and creates a musical story.

CW: At the preview session, I bring back samples generated from my computer and we play them for Paul with the finished episode. We talk about what we can change or adjust, and once everything is approved, we record it with live musicians.

Many of the episodes take place in famous locales around the globe. How does that impact your research?
CW: The geography of each episode has a huge impact on the music we select. We start at the geographical location and take music from that part of the world, and listen to hours of music from that region. Sometimes we even read books about the culture to learn as much as we can within the week. One of the really tricky things is figuring out how to tell and deliver the story through cultural instruments. If I use a Chinese flute and three drums to place you in the setting of China, I have to also demonstrate the different emotions Mickey and the gang experience.

PR: We change location every episode and the stories are all so different; we always end up with a completely unique soundtrack for each one. 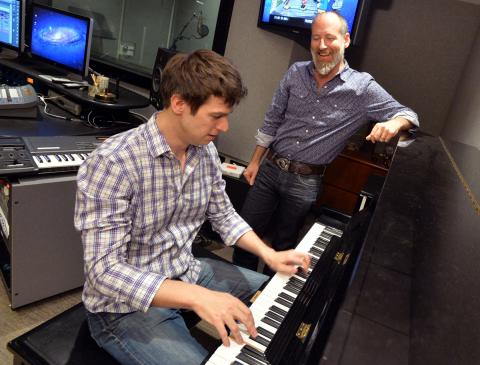 Why is music important to the Mickey Mouse shorts?
JS: There’s such a collaborative spirit to the Mickey Mouse shorts, but specifically with the music development as well. We come together on a bi-weekly basis, and waste no time with the music we can use. Every moment is important—you can hear Paul’s comments and see the detail that goes into Chris’ writing. Even one second makes a world of difference in music. And a lot of the storytelling is done through music. Chris’ role not only supports the dialogue in an episode, but sometimes allows music to take the lead in telling the story. He has the ability to thematically create melodies that become so integral to the storytelling.

PR: The episodes are short, and we want to make every second count as we share each story.  Someone like me, who can’t talk technically about music, can talk to a composer like Chris. We understand each other as it relates to the storytelling aspect. We also discuss the emotional content, message and point of the scene. Then we understand where we’re going and Chris can translate that into music.

Chris, what led you to your current role?
CW: I have an unusually classical music background for a film composer these days. If I didn’t, I don’t think I’d be able to write for these shorts. Often what we’re doing with these musical styles harks back 30, 40 and even 100 years for musical inspiration!

PR: Chris’ training and versatility are paramount to the music of the Mickey Mouse shorts.