Tonight, ABC Family’s award-winning original series Switched at Birth will break new ground for television. The hour-long drama, which premiered in June 2011, follows two very different teenage girls — one deaf — who discover they were switched at birth. For the first time in the history of the series, the show will be told exclusively from the deaf characters’ perspectives. That’s right — an entire episode in American Sign Language (ASL).

According to series creator Lizzy Weiss, tonight’s episode is a long time coming. “Every time we premiered another episode of Switched at Birth, we kept hearing feedback from viewers through social media channels that the ASL scenes were their favorites since they are so beautiful,” she revealed when I recently sat down with her. “As the show grew and grew, we asked, ‘How far can we take this? Can we do a whole episode in ASL?’”

Turns out ABC Family had the same idea. “In fact, the network called us a few months ago and asked if we ever thought about making an ASL episode,” Lizzy says. “Of course we said, ‘Let’s do it!’ We were nervous, but obviously very excited, too.” 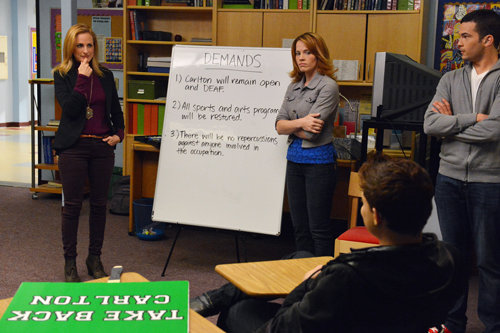 As you can image, putting together an all-ASL episode provided a few unique challenges for the show’s cast and crew. “The writers and I had to think about the show in a totally different way,” she admitted. “Watching this episode allows you to experience the world like a deaf person would. We wanted to make it more visual, because we didn’t want to do a regular episode and then rely on captions.”

They also had to pay special attention to the actors’ positioning — their hands couldn’t be blocked or busy holding objects. Even the credits proved challenging. “Normally we have the credits rolling on a speaking scene,” Lizzy explained. “Since there are no speaking scenes in this episode, and we didn’t want the credits running on top of captions, we had to come up with a creative solution.” 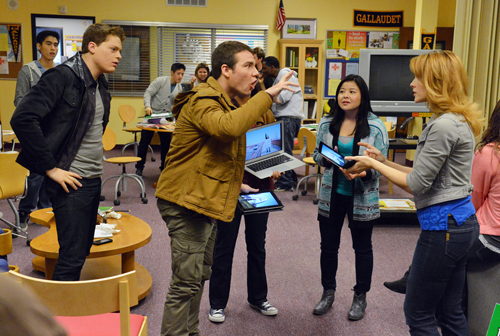 And though there were some additional hurdles to clear, Lizzy and her team had a lot of fun with the all-ASL concept, too. “You can do so many entertaining things with sign language that you can’t do with spoken language,” Lizzy points out. “We can have our characters speak across the room or during a movie.”

Beginning tonight, they’ll finally have a chance to show off the final product — a true labor of love. “We are so proud of it,” Lizzy said. “Our fingers are crossed that this helps earn the series a whole bunch of new fans.”