Today is a great day if you’re a fan of all things Disney! D23, the Official Disney Fan Club, has just relaunched its website — bringing incredible behind-the-scenes, exclusive Disney content to fans all over the world. 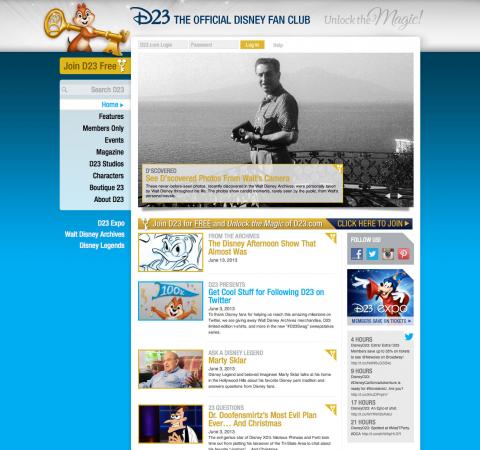 The reimagined D23.com gives members access to The Walt Disney Company’s vault of incredible material. Some of the highlights include never-before-seen personal photographs from Walt Disney’s camera, an inside look at Mystic Manor, which just opened at Hong Kong Disneyland, and sneak peeks at some of Disney’s most exciting upcoming projects.

I’ve gotten a chance to look through the site and I personally love the exclusive interviewwith Disney Legend Marty Sklar. Did you know he’s one of the few people who has attended the grand opening of every Disney park in the world?

In addition to the website redesign, D23 also launched a new level of free membership — and since you’ll have to be a member to access all of this cool, new content, click here to get registered!

Have you checked out the new D23.com? What are some of your favorite features?